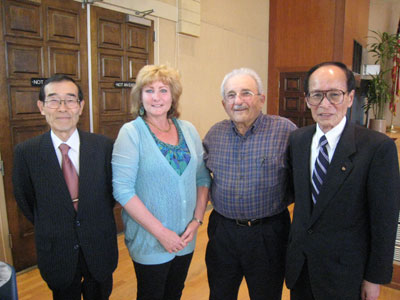 On April 1, sunshine yellow and royal blue balloons decorated the tables at the Santa Clara Senior Center. People lining up at the two long buffet tables picked up their plates and burgundy cloth napkins, their mouths watering over the delicious food brought to the Santa Clara Sister Cities 26th Annual Japanese Potluck. One of Santa Clara’s sister cities is Izumo, Japan.

“This is a welcome party for the 13 junior high students and two high school students from Izumo who are here to study in Santa Clara,” says Tom Kuwabara, life honorary president of the International Exchange Association of Izumo. “Every March, we send to Santa Clara two high school students, and from Santa Clara, two students go to Izumo. This exchange program is important to Izumo because the relationships between our countries are important.”

Yukie Ikezi, vice president of the Santa Clara Sister Cities Association, says the Japanese students are grateful for the efforts the organization makes to host them.

“Although the middle school program is not an exchange, the children from American homes hosting these students get an opportunity to learn about their visitors,” she says. “So it’s a great learning opportunity for our students here as well.”

Ikezi translates for Masao Nagira, president of the International Exchange Association of Izumo, when she discusses how the Santa Clara Sister Cities Association assisted in the Japanese tsunami relief efforts last year.

“Izumo was far away from the disaster,” she says. “Right after the tsunami, Mr. Nagira and Mr. Kuwabara were here, and the Sister Cities Association raised $1,700 for the disaster relief. Instead of going through Red Cross, we gave the money to the people in Izumo. The people converted our money to yen and sent the money to the town of Minamisanriku, which got wiped out by the tsunami.”

John Figueira Jr., who would be surprised with a cake for his 80th birthday later in the evening, is happy to look back on his past presidency, spanning almost 20 years, for the Sister Cities Association.

“I’m always interested in giving students the opportunity to visit overseas and learn about other cultures to see how people are different, but also the same,” Figueira Jr. says. “Even though I’m not president now, I’m still involved with the board here. I’ve come to many functions for Sister Cities, so this is like homecoming.”

Debi Davis, president of the Santa Clara Sister Cities Association, shares the benefits of friendship between the two cities.

“We do a lot of fundraising,” says Sara Scheuerman, a student at Santa Clara High School. “We focus a lot on hosting the Japanese and Portuguese students and going on exchange trips. [My friend Alex Kuwano] and I went to Portugal last year.”

For information about the Portuguese potluck honoring students from Coimbra to be held on April 15, visit santaclarasistercities.org.