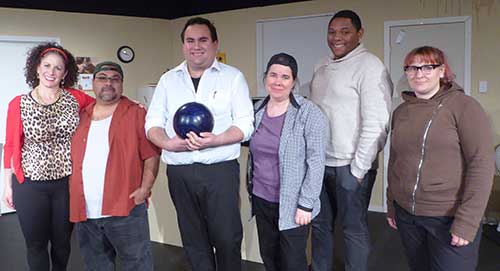 A 7-10 split, also known as bed posts, is one of the hardest of the ten-pin bowling shots to make. But back in the day, no shot was beyond Earl as he curled his prized, Lane Master Black Diamond Limited Edition ball down the lanes of Fred’s Bowl-a-Rama.

Earl has fallen victim to an online scam. Crown Prince Gustav, who lives in a country Earl can’t even pronounce, needs $10,000 from Earl so he can get his frozen fortune released by his hostile government. The prince will then reward Earl with a cool $15 million.

“Call me when I’m lounging on the Riviera after my ship comes in,” replies Earl, played by Dave Leon in his onstage debut with Santa Clara Players.

Comedic timing is everything, and the rapid repartee in the comedy, which premiered in Canada in 2011, brings lots of laughs, usually at the expense of Earl. He and Brenda live across the street from Brenda’s sister, the level-headed Laurie, in a tacky trailer in the Green Gables Trailer Park, where the utility bills go unpaid and the cable man is expected to knock at their door at any moment to turn off their service.

Laurie is played by Sarah Kishler, a City librarian in San Jose. Last to make an entrance on stage is The Visitor, played by West Valley College drama student John John Soto.

“This is a show that everyone can relate to. Everyone’s gotten those spam emails,” said director Thomas Times, who teaches second grade in Redwood City when he isn’t directing. “It’s a funny take on an Internet scam. Answering one email, you don’t know what can happen.”

“At the heart of the show, are people who are struggling, living paycheck to paycheck, doing whatever they can to make it, and love and dumb luck get them through it,” said Times. “This cast has been awesome. It’s a small, tight-knit community and everyone helps everyone.”

Santa Clara Players is a nonprofit community theater group, launched in 1962. It offers both beginning and seasoned actors and production crews the opportunity to work with experienced directors and producers.

“We do odd-ball plays nobody else does, by and large comedies,” said producer George Doeltz. “7-10 Split” is a lot of fun. I’m going to look at some more of Wilmot’s plays.”

For dates, times and tickets for “7-10 Split,” check the website (www.scplayers.org) or leave a phone message (408) 248-7993. General admission is $18, with senior and student discounts. Santa Clara Players is funded by its ticket sales and a subsidy from the City of Santa Clara. “Things My Mother Taught Me” opens May 12.

All shows take place in the 71-seat Hall Pavilion, 1511 Warburton Ave., behind the Triton Museum of Art, 1505 Warburton Ave. If you’re attending for the first time, it’s a good idea to check the website for directions. And bring a few friends for a good, shared laugh at life.

Painting for a Cause