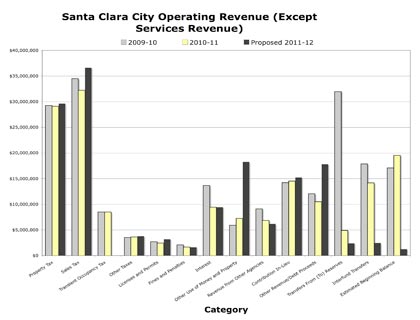 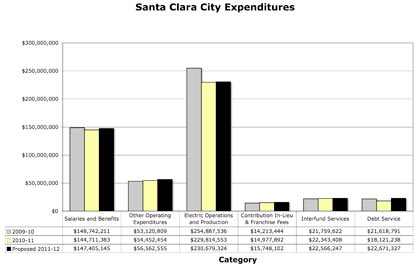 Despite freezing city salaries, implementing one-day-per-month employee furloughs, and cutting – or leaving vacant – about 100 full-time positions, Santa Clara’s compensation costs are anticipated to creep up 1.9% in the coming year. This growth is partly due, according to the City Manager’s report at the May 24 City Council meeting, to continuing growth in pension costs. The Weekly’s analysis of the proposed operating budget shows that the average cut in city pay is 1.6%

The revenue forecast for the coming year is up a total of 1.8%, with the largest share of the increase coming from increased city fees (overall up 30.1%), followed by anticipated 16.3% and 13.6% growth in hotel and sales tax revenue, respectively.

Some say these projections reflect unjustified optimism about a U.S. economic recovery. California’s unemployment rate has dropped since the beginning of 2011, but remains around 12%, according the U.S. Bureau of Labor Statistics (www.bls.gov). Further, although layoffs are down by half this year, initial claims for unemployment in California jumped 67% in April.

Regardless of the world economy, business travel may be declining inexorably, thanks to dramatic performance improvements and declining costs for videoconferencing and telepresence technology.

Conferencing is predicted to be one of the fastest-growing technology sectors, according to London-based telecom industry analyst Ovum, driven by business’ needs to cut costs and improve productivity by reducing travel.