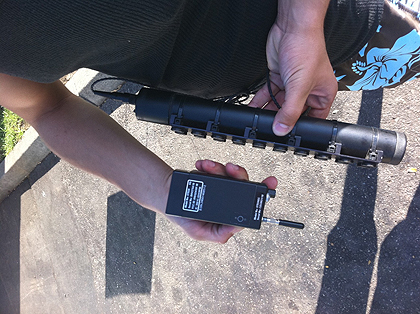 Long after all of us are gone, Yasir Afifi’s fourth amendment lawsuit will be studied by law students and invoked in cases of unwarranted searches. That’s because the ultimate outcome of the Santa Clara man’s case – which may well find its way to the Supreme Court – will influence whether the police and FBI can plant spy gizmos on your car at will.

During an oil change last October, the 21 year-old computer salesman and Mission College student found a clunky GPS tracking device and battery pack attached to the tailpipe of his car. Afifi initially didn’t know what it was, and posted an online query which quickly brought the answer.

It also brought agents from San Jose’s FBI office to Afifi’s front door, demanding he return their Guardian ST820 GPS tracking rig – suggesting that things would be unpleasant if Afifi wasn’t cooperative. (A wit on the website Reddit.com suggested auctioning the kit – surveillance apparatus about as sophisticated as Maxwell Smart’s shoe phone –on E-bay.)

Afifi, who has no police record, hasn’t been accused of anything illegal or criminal. So far, the FBI has offered no explanation for spying on him.

Early in March, Afifi filed a lawsuit against the FBI for violating his civil rights – specifically, his rights under the fourth amendment, protecting people from unreasonable searches and seizures, and requiring judicial approval and probable cause for search warrants.

The background to the law was the Excise Act of 1754, giving British tax collectors unlimited power to question American colonists and search homes for contraband. The legal principle of a right to privacy, however, reaches back to a1604 English case, in which jurist Edward Coke famously stated that a person’s home is “his castle and fortress…for his defense against injury and violence as for his repose.”

The authors of the Constitution couldn’t foresee our world, where surveillance doesn’t require physical intrusion. Thus, since the advent of electronic communication there has been a variety of judicial opinion on what does or doesn’t constitute invasion of privacy.

In 1967, the U.S. Supreme Court ruled that fourth amendment protections don’t apply when there isn’t a “reasonable expectation” of privacy” – in general, public places. That’s why, for example, a surveillance camera in the hotel lobby isn’t legally an invasion of privacy, while one in your hotel room is.

In Yasir Afifi’s case, the question is whether a parked car is in private or public space – and whether or not a warrant is needed for secret electronic tracking devices. Unsurprisingly, courts have ruled both ways.

In 2010, U.S. Court of Appeals for Washington D.C. ruled warrants were needed to continuously track suspects’ movements electronically, and that evidence gathered from warrant-less monitoring was illegal. “Prolonged GPS monitoring reveals an intimate picture of the subject’s life that he expects no one to have short perhaps of his spouse,” wrote Judge Douglas Ginsburg (appointed by Ronald Reagan).

A year earlier the New York Supreme Court ruled that warrants were required to track vehicle movement with GPS devices, saying that GPS tracking posed a categorically different threat to privacy threat than 1980s-era tracking beepers (which were allowed without a warrant).

But the law is far from settled on this. One reason that civil libertarians want to bring Afifi’s case is a 2010 decision by the U.S. Ninth Circuit Court. In that case, the majority ruled police, without a warrant, could legally place a GPS locator on a suspected marijuana farmer’s car while it was parked outside his home.

This case turned on the definition of “curtilage” – the property surrounding your home. In this case, the judges ruled, essentially, that anything unfenced or unlocked is public space where you have no reasonable expectation of privacy.

In an acerbic dissent from the majority, Chief Judge Alex Kozinski (another Reagan appointee) questioned the court’s decision on the grounds of equal justice.

“To say that the police may do on your property what urchins might do spells the end of Fourth Amendment protections for most people’s curtilage. The very rich will still be able to protect their privacy…but the vast majority of …people…will see their privacy materially diminished by the panel’s ruling.

“Open driveways, unenclosed porches, basement doors left unlocked, back doors left ajar, yard gates left unlatched, garage doors that don’t quite close, ladders propped up under an open window will all be considered invitations for police to sneak in…

“Poor people are entitled to privacy,” Kozinski concluded, “even if they can’t afford all the gadgets of the wealthy for ensuring it.”

Carolyn Schuk can be reached at carolyn@santaclaraweekly.com.

Santa Clara Police Serve it Up for Special Olympics