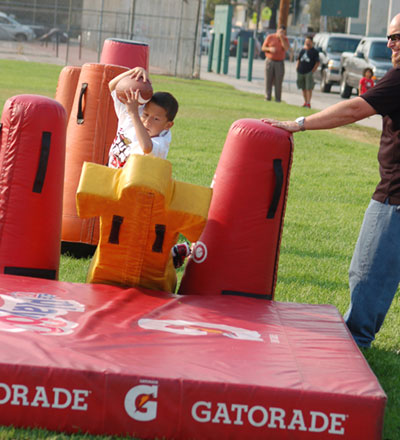 The event was organized by 49ers training staff and youth coordinators, including Tucker Baksa, with assistance from Santa Clara Lions staff. Over 100 boys and girls participated in each day’s activities.

Testing their athletic prowess, hand-eye coordination and attention to detail, the children participated in obstacles such as a running back drill where each child ran through a slalom-type course with various objects before plowing through a tackling dummy. Another station tested the youth’s ability at running routes – similar to the routes NFL receivers run – and catching balls while on the run. A quarterback station tested the young Joe Montana’s throwing accuracy, where they ran an “L” pattern before tossing the ball into a target. Another station assisted the young athletes in learning defensive techniques and aided in increasing their tackling abilities.

Prior to running the drills, youth were led in warm up techniques, stretching and how to stay hydrated. Lions Head Coach Craig Connelly and Peninsula Pop Warner Director Joe Tobia were both present and watched the youth enjoy the special training camps.

In addition to the Lions camp, a Gatorade Youth training camp was held at the Youth Activity Center on July 29. Additional camps have been held at various schools in Santa Clara as well. 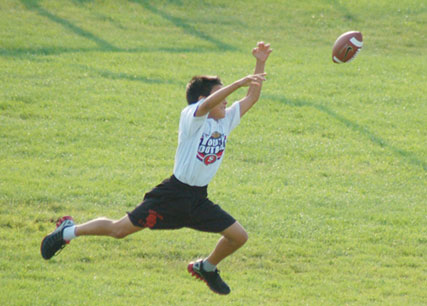 The Santa Clara Lions Pop Warner football club was founded in 1960. Dedicated coaches and friends built the program. It has become one of the most renowned programs in all of youth sports. Throughout Lions history, the main ideals and goals of the program have never been altered: “To build a program for the kids with the premise of maintaining a family oriented athletic program in the best interest of all the kids who participate.” Lions teams have won over 25 championships in their illustrious history.

Op-Ed
Author Robert HaughPosted on July 30, 2014
With red, white and gold confetti streamers flying about, champagne flowing and a lavish reception, Kool and the Gang’s “Celebration” would have been the...

Community
Author Erika TownePosted on April 8, 2021April 8, 2021
Almost a year and a half after announcing an all-inclusive playground in Santa Clara’s Central Park, the Magical Bridge Foundation (https://magicalbridge.org/) is making a last-minute...