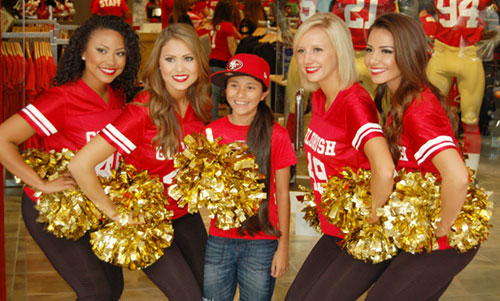 With red and gold fever running wild in Santa Clara, football season in full swing, and Levi’s Stadium over 50 percent complete, the sea of red and gold may swarm the City even more, with the 49ers opening a 49ers Team Store at Westfield Valley Fair on August 17.

Forty Niner fans lined up hours before the scheduled event, hoping to be one of the first customers to get a wristband for an autograph from 49ers All-Pro Linebacker Aldon Smith. Many began lining up as early as 4:30 a.m and over 1,500 fans attended the grand opening celebration, with 250 getting Smith’s autograph.

“We are thrilled to add the 49ers Team Store to our portfolio of retailers, especially with the team’s highly anticipated move on the horizon,” says Matt Ehrie, District Vice President and General Manager of Westfield Valley Fair. “The success of Saturday’s opening is a testament to the overall excitement of 49er fans, and Westfield Valley Fair looks forward to welcoming both the 49ers and their followers to Santa Clara.”

Gold Rush cheerleaders welcomed fans as they arrived, as well as posing for photos and signing autographs. Fans received a complementary 49ers rally towel, and were able to enter a raffle to win two tickets and two field passes to the 49ers season opener vs. the Green Bay Packers on September 8 at Candlestick Park. 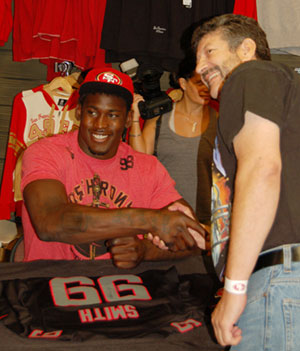 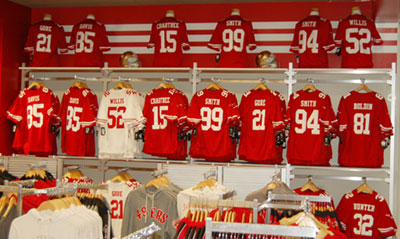 A sea of red and gold covered the store; with everything from official licensed jerseys, to hats, toys, purses, wallets, collectibles, house wares and more. Shoppers would be hard pressed to not find something not emblemized with a 49ers logo in the store. From small, novelty items such as pens, bottle openers, key chains, to large-ticket items like pro jerseys and high-end handbags, the store carries an array of merchandise, catering to every type of fan.

The 49ers Team Store is located on level 2, near to Macy’s at Westfield Valley Fair, 2855 Stevens Creek Blvd.