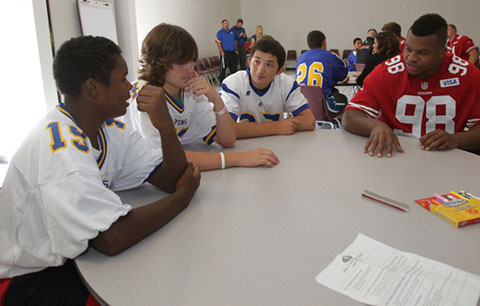 Working with youth to establish long (college and career) and short-term goals during high school, such as raising grades, training harder and focusing on schoolwork, while addressing the importance of goal setting, making positive choices, and the importance of education beyond high school, “Dare to Dream” has become an annual 49ers rookie class community relations event.

During the after school event, players mentored the students, discussed their hopes, expectations, and strategies for growing as athletes and individuals. Activities included team-building exercises like creating “secret” handshakes and conjuring up creative team names reminiscent of famous NFL Defensive units. Students created templates of short term and long-term goals for high school and what they envisioned for potential college and career choices, and presented their plans with their colleagues at the end of the event.

First-year Bruins head coach Hank Roberts, whose personal goal coming into the Bruins program is establishing a 100 percent graduation rate, says that the exercises with the 49ers players, who have taken their play to the next level, “will help our team focus on what is important and not let distractions interfere with who they grow to become in the future.”

Christian, one of the Bruins’ freshmen football players plans on applying Morris’ advice and utilizing the goals he set at the event to “excel in high school and college,” and then studying to become a veterinarian.

Following the event, the youth received autographs from the players – creating lasting memories for the youth and proving there is much more to football than Xs and Os on the play board.