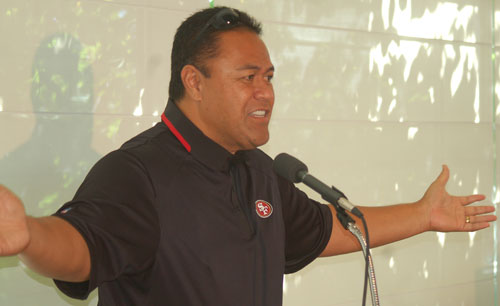 Speaking candidly about his experiences as one of the pioneering Polynesian professional football players, a heart condition that nearly derailed his football career, and his 15 years playing for the 49ers, four-time 49ers Super Bowl champion Jesse Sapolu delivered an inspiring message to approximately 100 guests at Mission College on Sept. 23.

“Last year, when Randy Moss made his remarks during the Super Bowl week, that was a kink in the armor of the team,” said Sapolu, mentioning the close bond that connected the special 49ers’ Super Bowl teams. “To become a champion, you have to be unselfish and think of others first,” added Sapolu, saying that the keys to success for the 49ers teams and any company is forming a chemistry and thinking about the team over one’s self.

Sapolu mentioned there are many great individual players who have never won championships. “I will not trade my championship rings to be a Hall of Famer,” said Sapolu. “We became champions because we created a bond … we cared for one another and loved each other … we believed in one another and always had faith,” said Sapolu, mentioning a game played in the Seattle Kingdome where noise was a huge battle. “How did we take the noise out of the game? Simple. We went up 24-0 early,” laughed Sapolu.

Having overcome rheumatic fever and an enlarged heart to be one of the most successful Polynesian football players of all-time, Sapolu gives advice to all. “Life comes with challenges. We have to cope with what we are dealt with. We are often told we cannot overcome adversity. Never, never, never give up,” said Sapolu, adding that aspirations and dreams are achievable for everyone.

One of Sapolu’s greatest satisfactions is knowing that by writing about his experience with the heart condition that children with the same condition may be motivated to live their dreams and play football.

One of only six 49ers to own four Super Bowl championship rings (1984, 1988, 1989, and 1994) the multiple-time All-Pro selection and Pro Bowler has been inducted into the State of Hawaii Hall of Fame, University of Hawaii Hall of Honor, and Farrington High School Hall of Fame. Sapolu currently serves as a 49ers alumni coordinator, and helped establish Polynesian Football Hall of Fame. His biography, I Gave My Heart to San Francisco, in which he discusses being the only NFL player to play after undergoing open-heart surgery, was released last year.

Op-Ed
Author Carolyn SchukPosted on November 5, 2018
You could compare candidate for Mayor Anthony Becker’s online campaign to the new TV season. And you could call that of his opponent, Sitting...

Op-Ed
Author Carolyn SchukPosted on July 4, 2019
As we celebrate the anniversary of the birth of the United States, it’s a good time to remind ourselves that there may not have...