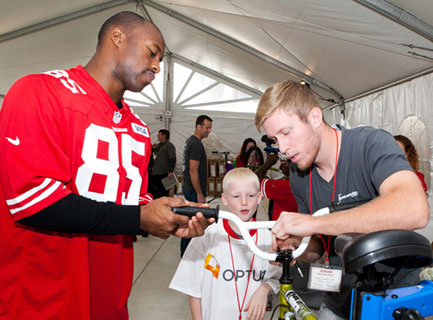 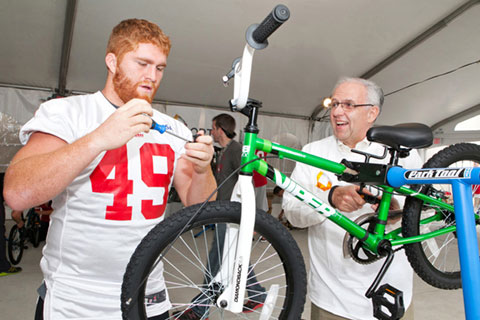 Rather than vaulting down the sidelines, gaining first downs or tackling their opposition while vying for gridiron supremacy, several 49ers recently helped make the holidays brighter for many, by helping assemble 49 bicycles for children.

Joining forces with employees and volunteers from Optum, Turning Wheels for Kids and Optum Pro Cycling team members, members of the 49ers, including All-Pro Tight End Vernon Davis, took time from weightlifting, working out and practicing their football skills to build the bicycles at 49ers Headquarters in Santa Clara on Nov. 11.

The bicycles were built for underserved youth from EHC LifeBuilders and concluded with surprise delivery of the bikes to 49 youth at an interactive non-contact football camp and health and wellness fair at Lick Mill Park.

Turning Wheels for Kids, the organization responsible for building and donating over 14,000 bikes during the holidays has been donating bikes to in-need children for the last eight years through more than 20 non-profit organizations on the Bay Area. Visit www.turningwheelsforkids.org for additional information on Turning Wheels For Kids.

Optum is a leading information and technology-enabled health services business dedicated to helping make the health system work better for everyone.

EHC LifeBuilders provided services, shelter, and housing opportunities homeless and those at risk of homelessness in Santa Clara County, serving more than 5,600 individuals, families, youth, and veterans each year. The families of the children benefitting from the bike build are formerly homeless and live at EHC’s Sobrato Family Living Center as their families work to rebuild their lives.

49ers - Champions On and Off The Field

Op-Ed
Author Robert HaughPosted on July 22, 2015
As Super Bowl 50 inches closer and closer by the day, the City of Santa Clara has been gearing up in an array of...