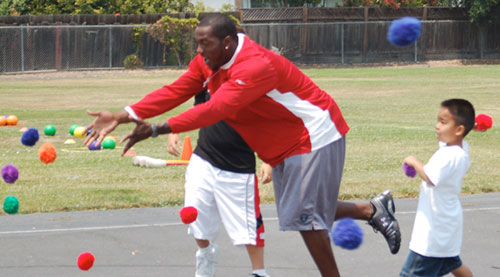 While battling it out on the gridiron in their quest for their sixth Lombardi trophy, the San Francisco 49ers are warriors on the field. But outside their impeccable athletic prowess, heavy conditioning, intense workouts and practice regimen, the reigning NFC champions 49ers give back to the community throughout the year, showing they are champions both on and off the field.

Whether helping build bikes for underprivileged children, granting wishes for children suffering from disease, to serving spaghetti to fans for charity, helping educate youth how to use modern fitness equipment, teaching the arts, or participating in one of the a plethora of youth training camps, 49ers players and staff go above and beyond to make the community a better place.

Established over 20 years ago, the 49ers Foundation is the non-profit community funding extension of the 49ers, supporting development programs for underserved youth that keep them, “Safe, On Track, and In School.” The foundation has donated nearly $20 million since its inception. 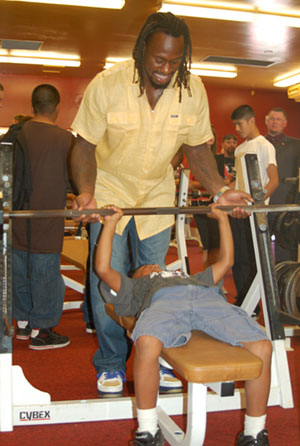 In 2012, the 49ers Foundation and community relations’ efforts scored just as many touchdowns as the NFC championship-winning team did on the field. According to the foundation, $2.9 million was donated to local non-profits in 2012, a 25 percent increase from 2011. The giving earned the 49ers the No. 10 spot in the San Jose Business Journal’s Corporate Philanthropists list (though listed as $1.8 million in the Biz Journal) ahead of such companies as Bank of America, PG&E, Adobe, IBM and eBay. 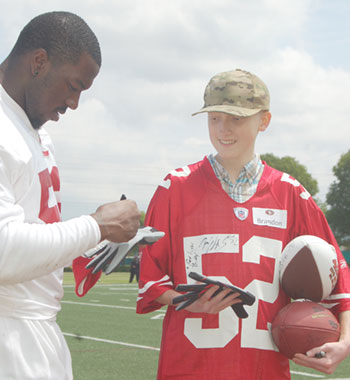 In addition to giving financially, 49ers players and staff have given back countless hours of community service, with 100 percent of the team’s players participating in one or more community events in 2012, and contributing over 320 hours of service to the community. In addition, 49ers alumni, coaching staff, front office, and family members contributed over 375 hours of service. The foundation was the recipient of a 2013 Steve Patterson Award celebrating excellence in sports philanthropy from the Robert Wood Johnson Foundation.

The 49ers have helped build and fund multiple 49ers Fitness Zones (including one at Buchser Middle School and an outdoor fitness zone at Peterson Middle School), led thousands of 49ers Gatorade youth football camps, participated in the Turning Wheels For Kids’ Holiday Bike Build and have helped fulfilled wishes and dreams through SF Bay Area Make-A-Wish. Additionally, the team and foundation host many fundraisers each year, including the Pasta Bowl at the Santa Clara Convention Center. Their activities aren’t limited to the playing season. They hold several off-season events, including the 49ers Winter Fest, Hillsborough Concours d’Elegance, 49ers Academy Gala and more.

Visit http://www.49ersfoundation.com for more information on the 49ers Foundation.

In addition, several 49ers players are actively involved in the community, including All-Pro Tight End Vernon Davis who recently launched The Vernon Davis Foundation for the Arts designed to promote art education and art appreciation among youth from disadvantaged backgrounds. The organization provides scholarships to dedicated art students and grants to deserving nonprofit programs that share in their ideals. Wide receiver Anquan Boldin started the Anquan Boldin Foundation, which is dedicated to expanding the educational and life opportunities of underprivileged children.

Op-Ed
Author Editorial BoardPosted on August 9, 2022
Mayor Lisa Gillmor may have many shortcomings, but one of them isn’t a lack of imagination. Unable to get the City’s actual voters behind...

Op-Ed
Author Erika TownePosted on March 4, 2022March 12, 2022
Dear Diversity, Equity, and Inclusion Task Force Members: First, I want to commend you on deferring the topic of an Elected Police Chief until...
SPONSORED