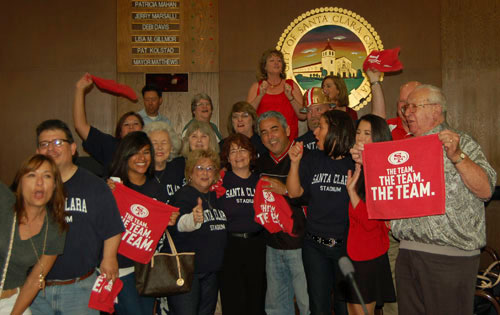 Imagine 70,000 football aficionados flocking to Santa Clara to see Vernon Davis, Colin Kaepernick, Patrick Willis and the 49ers strutting onto the field February 7, 2016 for the Golden Jubilee at Super Bowl 50 here in Santa Clara. Imagine local hotel rooms, restaurants and other businesses thriving for over a week.

Imagine no more. With a sea of red and gold as well as an abundance civic leaders and Measure J supporters watching live at City Hall, hundreds witnessed history on May 21 when the San Francisco Super Bowl Bid Committee was awarded Super Bowl L at Santa Clara’s Levi’s Stadium. The San Francisco committee bested a bid by South Florida to host the event at Miami’s Sun Life Stadium.

“Today’s vote is the culmination of hard work from a number of dedicated individuals,” said 49ers CEO Jed York moments after the announcement to 49ers.com. “Our bid committee should be commended for putting together a proposal for NFL ownership that accurately depicted how memorable a Bay Area Super Bowl will be.”

According to 49ers.com and NFL statements, the bid to host Super Bowl L was assisted by the region’s emphasis on technology and sustainability, as well as the Bay Area’s mild weather, multi-culturalism and winning sports atmosphere. 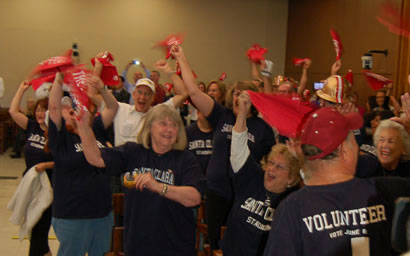 The stadium, expected to open in 2014, will be LEED certified and the most technologically advanced and environmentally friendly stadium ever constructed, with WiFi capability for up to 75,000 patrons simultaneously. A green roof and solar energy design elements will also be the first of its kind in a Super Bowl.

Besides bringing worldwide spotlight to the community, the Super Bowl brings in tens of thousands of hungry, sleepy and entertainment-seeking football fans from across the world.

“The economic impact will be profound as both teams, their players, support staff, families and thousands of fans come to Santa Clara and the Bay Area, bringing with them excitement, revenues and recognition of the greatest place to live in the world,” said Mayor Jamie Matthews. “Even with shovels in hands, this stadium project was doubted. We, in Santa Clara, may not be the fanciest, but we get things done the Santa Clara way. This is a vision, built on the collective vision by many.”

The NFL indicates an average economic impact of the Super Bowl on a host city ranges from $150-$400 million and is contingent on many factors.

Now, imagine no more. If you build it, they will come. The Super Bowl is coming to Santa Clara in 2016.