A small group of Santa Clara High School students received an amazing opportunity: the chance to donate $20,000 to two local non-profits. On Oct. 25, the students awarded the Bill Wilson Center and the Ecumenical Hunger Program $10,000 each.

The ceremony was a culmination of almost a year’s worth of work. Students chose projects and local issues they were passionate about: homelessness and hunger.

“They did a lot of learning on everything from how to read financials to [creating] their own request for proposals, [and putting] it out in the community,” said Amy Kingman, Executive Director of the Learning by Giving Foundation. “If you look at the data, the average donor does two hours of due diligence, these students have probably done closer to 60 hours of due diligence before they made their decision.”

The Learning by Giving Foundation is a non-profit started by Doris Buffett. It’s designed to educate students on the benefits of philanthropy. Until now, the program has only been for college students, but when the Foundation decided to work with high school students, the 49ers Foundation STEM Leadership Institute immediately came to mind.

“It just seemed like a natural fit,” said Kingman.

For 49ers Foundation Executive Director Justin Prettyman, the partnership was a perfect way to celebrate six years of hard work by the students.

“These guys have been with us a long time, heading off to college, so what cooler way to say you capped off your senior year?” said Prettyman. “A lot of these kids are going to go on to be future leaders and hopefully…come back and give back to the community.”

The process was hard. Many of the students had to control their passions as they picked projects.

“They’re teenagers, they’re 16 and some of them weren’t even 17 at that time,” said Jyothi Sunkara, one of the Santa Clara High School AP Capstone teachers for STEM. “You feel strongly about kids disappearing from foster care or child abuse and they have personal connections to each of these stories. It was a very, very hard thing, but it was very mature of them to just get behind whatever the class decided.”

Sunkara worked with the students during their junior year to help them decide the causes they would tackle. In their senior year, Santa Clara High School AP Capstone teacher for STEM Kate Flowers-Rossner helped guide them the rest of the way.

“The debate about which organization actually was going to be awarded the $10,000 grant, that was challenging because instead of being objective like it was the first round, it was subjective,” said Flowers-Rossner. “We wanted to make sure all of the voices were heard and that was a challenge and it was frustrating…but they are incredibly mature students and they took it very seriously and they came to their decision.” 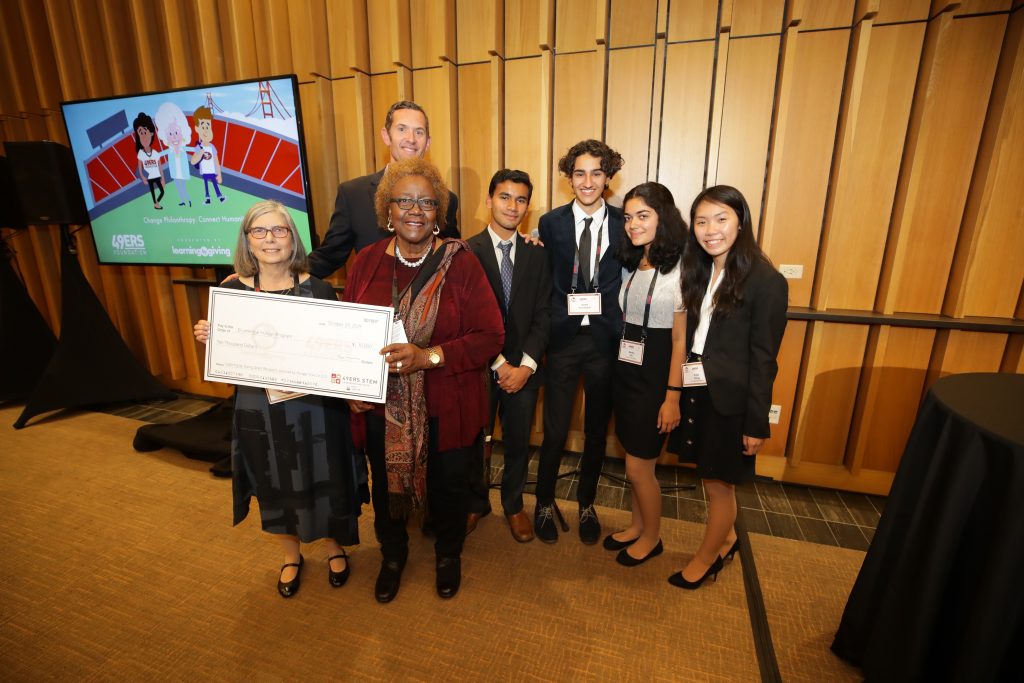 For the students, the experience was invaluable.

“In Learning by Giving, we worked in a professional environment and we basically had meetings every day rather than normal class,” said Hawk Azordegan, Santa Clara High School senior. “It was a collaborative discussion. I didn’t think I’d be experiencing that in high school.”

“It was really cool just seeing it all come together and go against an issue that we all felt passionate about,” said Santa Clara High School senior Siddarth Ramkrishnan. “Being able to influence a community, it really feels good.”

“I think the biggest thing we learned is that philanthropy doesn’t mean necessarily monetary donations,” said Isabel Zhong, Santa Clara High School senior. “One of the first things we learned when we went into the program is you can also be a philanthropist without having large monetary donations. You can donate your time…anything else, you can make your community a better place.”