By any comparison you want to make, Santa Clara’s City Manager takes home a pay package that’s double that of the average California city manager.

Santa Clara City Manager Deanna Santana has the highest base salary — $448,320 — and the second highest total compensation package — $709,446 — for a city manager/city administrator in California.

The argument that’s made for the City Manager’s high salary is that Santa Clara manages three enterprises that most other cities its size don’t — an electric utility, a stadium and a convention center.

Even narrowing the field or relevant comparisons, Santa Clara still tops the list by a long shot.

The only City Manager whose compensation package tops Santana’s is that of San Jose City Manager David Sykes — who manages a city about ten times the size of Santa Clara, with two professional sports venues and a convention center that dwarfs Santa Clara’s.

Sacramento — the state capital with a population of 514,000 — has professional sports venues, convention centers and a municipally owned $1.7 billion electric utility. Sacramento City Manager Howard Chan’s base salary is $287,078 and his total compensation package is $438,133.

Oakland, with a population of 430,000, a stadium and a municipal electric company pays City Administrator Sabrina Birnbaum Landreth a base salary of $298,541 and total compensation is $432,964.

Los Angeles has three Assistant City Administrators, paid a total of $632,923 in salary –each is paid about $100,000 less than a Santa Clara Assistant City Manager — and $945,046 in total compensation. 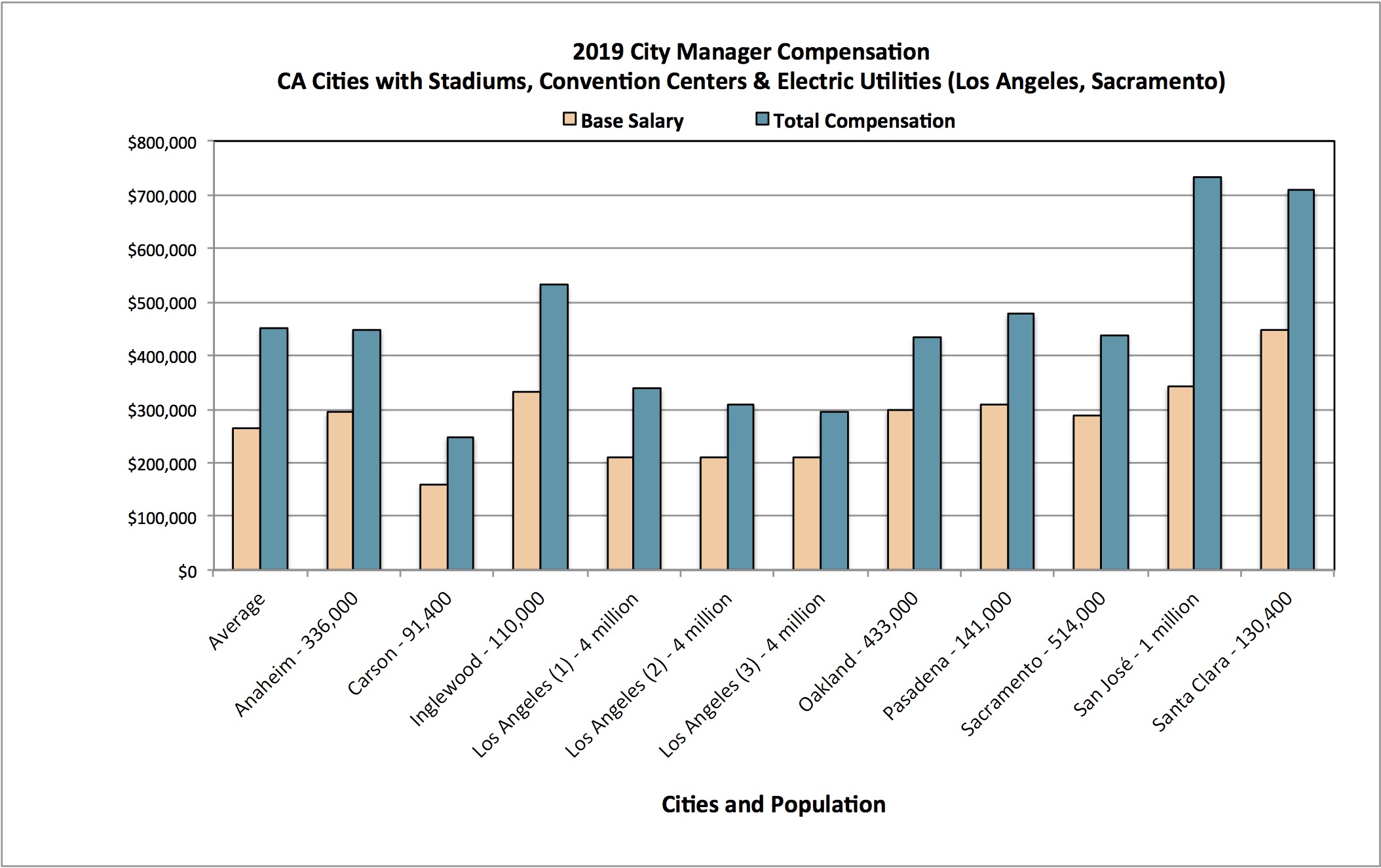 City Council Members have argued that the demands on Santa Clara’s city manager are extensive and the City has fewer staff than other cities to handle the workload.

So how does the current city manager’s compensation compare with that of previous Santa Clara city managers Don Von Raesfeld, Jennifer Sparacino and Julio Fuentes?

If anyone can be called the father of modern Santa Clara, it would be Von Raesfeld, who was City Manager for 25 years, having previously served as Director of Public Works.

He set Santa Clara on its path to electric power self-sufficiency by investing in generating capability at a time when other municipal electric utilities were selling off their assets.

City Manager Jennifer Sparacino, who served for the following 26 years after serving as Deputy City Manager, began her tenure by negotiating the deal that kept Great America from being turned into an office park, acquiring the land that Levi’s Stadium sits on as a part of the deal.

Sparacino also managed the development of the Convention Center, the Golf and Tennis Club, Youth Center and the Don Von Raesfeld power plant that supplies one-third of Santa Clara’s electricity.

Before she retired in 2012, she negotiated the Levi’s Stadium funding agreement that insulated the general fund from any stadium debts and liabilities and made it a self-funding enterprise.

Following Sparacino, Julio Fuentes, Santa Clara’s first city manager hired externally in more than half a century, began his tenure in 2013 by managing the construction of Levi’s Stadium, the venue’s successful opening in 2014, and the highly successful Super Bowl 50.

He also spearheaded the Related Santa Clara project, put in place new development fees that are bringing the City millions in new funding for parks, and built the City’s general fund reserves to more than $50 million from about $3 million.

When Santana was hired 2017, the Council didn’t unanimously favor Santana’s compensation package — which included a $3,500 a month housing allowance to pay the mortgage on her Sunnyvale residence, two months of paid time off a year, more than $30,000 in deferred compensation, and an annual “extra” retirement account donation of $18,000.

But Mayor Lisa Gillmor and her allies were staunch in their endorsement of Santana’s unprecedented compensation goodie bag.

Mayor Lisa Gillmor said that the community “asked us to find somebody who is a virtual miracle worker. She checks a lot of the boxes.”

The Council did discontinue Santana’s housing allowance after giving the City Manager about $75,000 in raises over the last two years.

Note: Salary numbers come from the most current numbers reported to the state via TransparentCalifornia.com and include the Santa Clara City Manager as part of the average. The few compensation amounts under $80,000 were not included as they are unrepresentative of California as a whole and are likely to represent less than a year’s pay.

City Politics
Author Jacob BournePosted on March 27, 2019
A new study by Next 10, an independent, nonpartisan organization that studies and reports on quality of life issues in California, and Beacon Economics,...
City Politics
Author Carolyn SchukPosted on October 8, 2014
City Endorses Real Service, Not Just Lip-Service, to Protect Domestic Violence Victims The first order of business at the Sept. 23 Santa Clara City...

City Politics
Author Erika TownePosted on August 28, 2019
Sunnyvale is moving forward with its Vision Zero Plan, a set of policies designed to make the city streets safer for pedestrians and bicyclists,...
SPONSORED