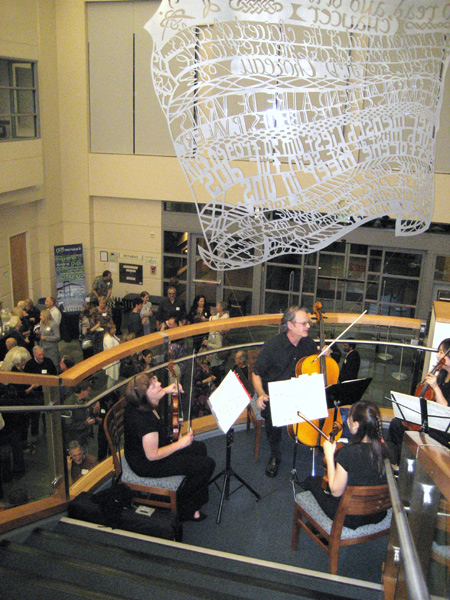 “It’s an incredible thing when a nonprofit organization founded by volunteers is still thriving after ten years, doing nothing but getting stronger and better every year,” says Maria Daane, Executive Director of the Santa Clara City Library Foundation & Friends at its 10th anniversary celebration October 20, held after hours at Central Library.

“The foundation has raised over $2.5 million through the support of hundreds of volunteers and donors,” says Daane. “There are very few cities our size that have their own Library Foundation, and I think Santa Clarans should be proud that through the work of so many, the organization has been successful through a decade that began with the dot-com boom and is ending with a major recession.”

About 150 library supporters attended a champagne and dessert reception honoring the foundation’s decade of service to the community and the volunteers and donors who have made possible the many library programs the foundation has funded, from parent-child and adult literacy programs to job search support in the technology center and outreach to the homebound.

“The foundation support has enabled us to bridge the digital divide and have a much further penetration into the community,” says Julie Passalacqua, city librarian. “The foundation is helping us to transform lives.”

In special honor of former library trustee Nancy Toledo, whose dedication led to the establishment of the foundation in 2001, the foundation board announced an annual Nancy Toledo Volunteer Leadership Award. Establishing a thriving foundation was no easy task.

“In the beginning it was difficult to find anyone to work with me. No one wanted to take the lead,” says Toledo. However, with the support of retired librarian Don Fuller and former Mayor Judy Nadler, “a board of directors who could make a difference” was formed.

“The library gives so much to the community,” says Toledo. “So I invite everybody who can, to join us in any way they can donate or volunteer.”

Kaiser Permanente Santa Clara and Mission City Community Fund (MCCF) were singled out for awards because of their exceptional loyalty and generosity to the foundation. Chris Boyd, Senior VP and Area Manager for KP Santa Clara, accepted the award from Mayor Jamie Matthews. Kaiser Permanente has donated $225,000 since the opening of the new Central Library to fund a health and wellness collection. MCCF has supported adult literacy programs and given more than 10,000 free books to summer readers.

“The library has always been very important to MCCF. Our board of directors believe in the importance of literacy,” says Jerry Marsalli, Board of Directors Chairperson. “I’m proud of this library and that we’ve been able to help the community.”

Library supporter Margo Will has always lived within a mile of the library.

“The library was the best place to study in high school, do research, and ‘just ask the librarians.’ Now that we’re tightening budgets, it especially makes sense to come to the library and read some books that maybe you wouldn’t have otherwise read—something not at Costco,” says Will, who has never outgrown the library. The library has grown up with her, offering something for each stage of her life.