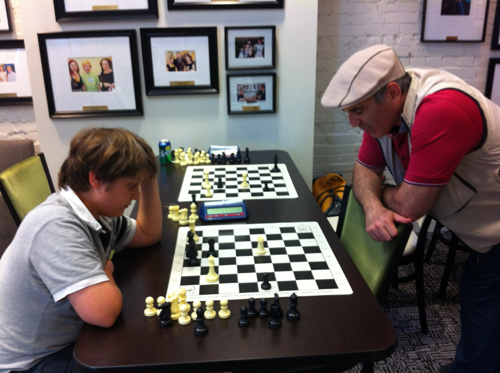 While most junior high students are getting ready to go back to school, one incoming sixth grader at Don Callejon School is busy studying up on being the next chess super star. His name is Sam Sevian, a native of New York who moved with his family to Santa Clara in 2007. At 11-years-old, Sam has already won a variety of chess awards, including a couple of first place prizes at the Metropolitan Invitational Chess Tournament in Los Angeles.

Sam’s reputation for his outstanding chess playing strategies earned him an entry into a prestigious chess training program sponsored by the Kasparov Chess Foundation and the Chess Club and Scholastic Center of Saint Louis. The Young Stars-Team USA program supports seven young American chess prodigies from nine to 15-years-old.

“I didn’t apply to the program,” Sam says. “I was selected by the foundation. They checked my achievements and my rankings.”

“We have entered into a five-year partnership with the Kasparov Chess Foundation on an elite youth chess training program,” says Mike Wilmering, communications specialist for the Chess Club and Scholastic Center of Saint Louis. “A grant funds the program designed to help American chess prodigies from across the United States. We think these kids are the best and brightest young American chess players and they will represent the U.S. on the world stage for years to come. Sam broke the record for being the youngest national master- that’s a chess title- in the United States when he was just nine years old.”

At this summer’s camp, which took place between June 18-29 in St. Louis, Sam worked with the world-famous chess guru and chairman of the Kasparov Chess Foundation Garry Kasparov to further develop his chess abilities.

“It was very good [to work with Garry Kasparov],” Sam says. He adds that he had heard of Kasparov before attending the camp, and it was a pleasant experience to finally meet one of his role models.

“We analyzed everyone’s games,” Sam says of the work he did at the chess camp. “Everyone prepared for games and we analyzed each other’s moves in the group.”

Sam started playing in chess tournaments when he was six, and won his first trophy around that age. He plans to continue playing chess through the sixth grade and participate in more tournaments.

Regarding the progress he has made in the chess scene so far, Sam is grateful for the support of his coaches, Alex Chernin and Andranik Matikozyan. He also wants to thank his father, who taught him the game of chess when he was five-years old.

“Back in Armenia, I played chess,” says Armen Sevian, Sam’s father. “There are many benefits to chess. It helps players with their abilities to focus and concentrate. Chess players find different ways to solve problems.”

Sevian encourages other parents to show their children how to play chess.

“Find a local chess club or local chess teacher in your area,” Wilmering adds. “There are hundreds of free resources online that will teach you the basics of chess. Once you learn the basics, the best way to learn is just to play.”

More Than 1,000 Great Golf Courses in the Great Lakes State - Part I