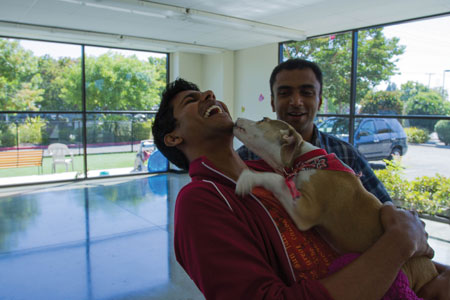 Animal adoptions tend to spike during the summer months. Between kitten season and the warmer weather, singles and families often choose to adopt during this time of year. Adoption events at local shelters are a great way for the organizations to provide fun and entertainment to potential adopters. They also help raise awareness about the pet overpopulation problem that plagues the country.

On August 11, Silicon Valley Animal Control Authority and Humane Society Silicon Valley both held adoption events at their locations, with each putting up commendable numbers given their respective sizes.

At SVACA, eight kittens and three dogs, including Marcos a year-old chocolate Chihuahua who had been at the shelter since May, were adopted.

“We specifically targeted August for an annual adoption event as we’re in the middle of kitten season,” said Shelter Manager Michael Limper. “We hope to adopt out numerous kittens as we have over 60 in the shelter and 22 currently in foster homes.”

The Aloha Adoption event saw the shelter adorned with festive island décor, and potential adopters were greeted at the door with a lei to get them into the spirit of the afternoon. Friends of SVACA raised funds for the shelter by holding a raffle for various animal-related prize packages, and adopters were able to name their own adoption fee.

An Olympic-themed adoption event was held at HSSV to coincide with the Olympics in London. Dog agility demonstrations were held and there were Olympic events, like the Animal Cracker Steeplechase Relay, for kids to participate in.

“HSSV has really evolved to become a family destination,” said Vice President of Marketing Mark Saraceni. “On Saturdays, we feature a lot of unique interactive exhibits, games, and activities that are kid-focused. Most importantly, we feature a lot of hands-on opportunities for kids to hug, pet, and kiss our animals. This Saturday, we are adding an Olympic spin to the event – in part to kick off a 10-day special promotion in which all of our animals can be adopted for 50 percent off of regular adoption fees.”

Nearly 700 people showed up for the event, which resulted in 47 adoptions of dogs, cats, kittens and rabbits.

There are still plenty of animals at both shelters looking for new homes. At SVACA, a four-year-old black and white cat named Panda, who found himself at the shelter after being hit by car and 10-month-old Arthur, a Chihuahua mix who has been available since April are looking for new homes. And, at HSSV, Tristan, a two-year-old energetic Jack Russell Terrier is available as well as Boo and Bree – two two-year-old black cats who are looking to be adopted together. Boo and Bree are part of HSSV’s Homeward Bound program and their adoption fees have been fully sponsored.

Both SVACA and HSSV are part of the WeCARE alliance. Six animal welfare agencies – SVACA, HSSV, Palo Alto Animal Services, Town Cats, San Jose Animal Care Center and Santa Clara County Animal Shelter – are part of WeCARE. The organizations work together to ease the strain of shelter overcrowding and educate the community. All six shelters are participating in the 50 percent off promotion, which runs until August 19. For additional information visit www.wecareproject.org.

Community
Author Diane AndrewsPosted on April 8, 2015
“‘The Mask You Live In’ is absolutely a powerful documentary about what it’s like to grow up being male. It will stir deep emotions...

Community
Author Melissa McKenziePosted on December 10, 2014
Community help is still needed to save the life of a companion service dog that was hit by a car on El Camino Real...
SPONSORED