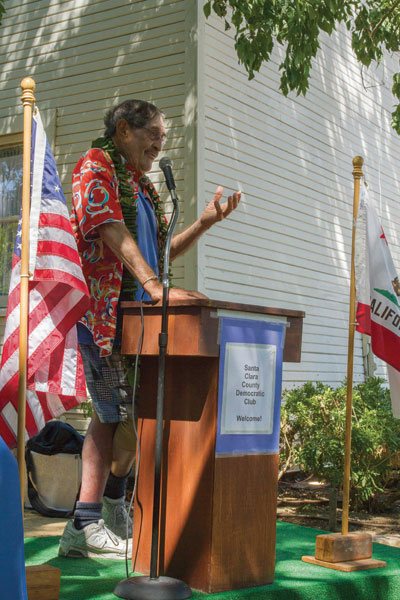 Nobody really cared Saturday afternoon that Willie Brown was a no-show at the Santa Clara County Democratic Club’s John Vasconcellos Day held in the historic garden at the Harris-Lass Museum. Plenty of other local political heavyweights were on hand to honor the veteran state assembly member and, later, state senator.

And of course, the well-loved “Senator John” himself was there with his reminiscences of a long life well-lived, and his signature message that politics and governance needs to be based on our best aspirations, not our worst fears. “He has that professional conviction that everybody counts,” said Lockyer in his introduction. “He’s determinedly passionate about everything he cares about.”

A lifelong Santa Clara native, Vasconcellos still lives in the same modest Santa Clara condo off Saratoga Ave. that he has for three decades. “Being here today is being home,” he told the crowd. “One of the people here today had a coffee for me when I first ran [for state assembly] in 1966. I’m grateful you are all here today to welcome me back home.”

During his nearly four decades in the state legislature, Vasconcellos was chair of the powerful Assembly Ways and Means Committee. He is also known as the “Johnny Appleseed of Self-Esteem.” The route the veteran legislator took to create this part of his enduring legacy offers an object lesson in the pragmatic foundation of Vasconcellos’ success throughout a long legislative career: bipartisan consensus building.

He used it to build the California Community College system in the 1970s. And, as much as Vasconcellos was personally identified with the self-esteem movement, the fact is that the California Task Force to Promote Self-Esteem and Personal and Social Responsibility” was signed into law in 1986 by a Republican Governor, George Deukmejian.

Although he retired from the state legislature in 2004 – forced out by term limits – Vasconcellos has been active in promoting his non-profit Politics of Trust foundation (www.politicsoftrust.net).

“Politics is broken,” he said. “The state’s on the verge of collapse, I fear – and I’ve never been so frightened for the future. My charter is finding a new politics. We all simply want to be people who can live lives of integrity. We belong to ourselves and each other…and we need to design politics based on that.”

What does that mean in practice? He’s said it many times over the last 40 years, in many ways. But perhaps one of the most concise was how Vasconcellos put it in an LA Times editorial in 1988. “It’s time [to] put the legitimate needs and aspirations of the people before the politics of cynicism and symbolism.”

The afternoon’s formalities concluded with a special recognition of Vasconcellos by peninsula Congresswoman Anna Eshoo for “outstanding and invaluable service to the community.”

Community
Author City of SunnyvalePosted on January 20, 2020
​A new branch library and learning center is coming to the Lakewood neighborhood in north Sunnyvale. The 20,000-square-foot facility will be located on approximately...
Community
Author AdminPosted on January 30, 2013
Ongoing – Farmers Market Every Saturday morning The Downtown Santa Clara Farmers Market continues its popular year-round engagement every Saturday from 9 a.m. to...