Improved finances aren’t the only bright spot in Santa Clara’s 2019-20/2020-21 budget. The other is a brand new format for the City budget book.

The book now includes a glossary and explanations of municipal finance and acronyms. There are also revenue and expenditures summaries in descending levels of detail, illustrated with charts of the City’s finances.

The new budget also breaks out costs for salaries, overtime, benefits and pensions and shows how spending lines up with stated City Council objectives — staffing additions, consultants, and one-time and ongoing costs.

The City’s budget will grow 1 percent to $955 million in the coming year and another 4 percent to $992 million in 2020-21. Santa Clara’s electric utility — Silicon Valley Power — accounts for 55 percent of the budget, which goes for purchasing, generating and delivering electricity.

By City policy, general fund reserves should be enough to run the City for three months. This means for 2019-20, the reserve should be $62 million and $63 million in 2020-21. The City anticipates closing the current fiscal year with sufficient surplus to bring the fund up the prescribed level.

But good news comes with a qualifier.

“The forecast shows surpluses and deficits that are modest and highly sensitive to unexpected changes in … revenue or expenditures,” City Manager Deanna Santana’s wrote in her budget transmittal letter. Deficits will be addressed, Santana wrote, with “ongoing solutions” — steps to permanently reduce costs rather than one-off cuts.

“The budget continues to be fragile,” Santana wrote, with “indications for a potential economic slowdown in the near future” as well as “other factors” that could change the picture.

The City’s three major revenue sources — property, business-to-business sales tax and hotel (TOT) tax — are forecast to grow, collectively, by 5 percent. Property tax is the City’s most stable revenue, while sales tax is the most volatile.

Property tax has overtaken sales tax as the City’s largest single revenue stream and is expected to grow 7 percent in both the next two years — from $60.3 million to $68.9 million in 2021.

Permit and license revenue is anticipated to grow from $11.3 million to $11.5 million in the next two years, while rent income is forecast to jump 33 percent to $14.1 million. Revenue from services fees (excluding utilities) is expected to be stable over the next two years, about $41.8 million.

Salaries, benefits and pensions make up nearly 80 percent of general fund expenditures. In the next two years these costs are expected to grow 6 percent to $198.8 million.

Fifteen new positions at City Hall will also be added in the coming year, including a Citywide sustainability manager. 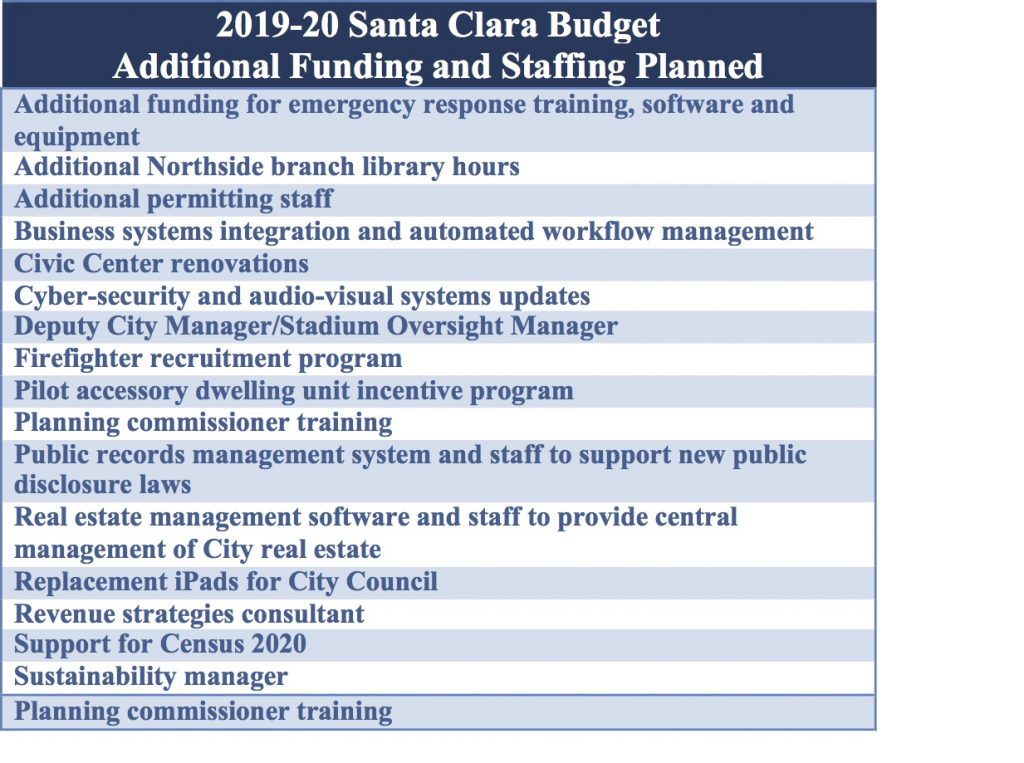 April Calendars and the Return of Related’s Lobbyist

Business City Politics
Author Jacob BournePosted on October 31, 2018
This September, the City of Cupertino adopted its Vallco Town Center Specific Plan to guide development in a northern part of the city that...
SPONSORED