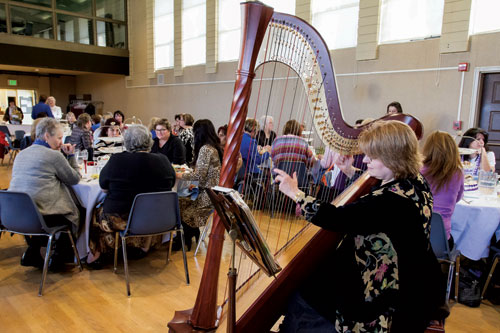 Hibiscus blossoms floated in the berry-colored champagne cocktails. Hints of cinnamon and orange flavored the spiced black tea. Pat Mahan’s delicious deviled ham sandwiches, made with sweet pickles and black forest ham, disappeared fast from the tiered plates, as did Yuki Ikezi’s chutney surprise, plush sandwiches made with mashed prunes, applewood bacon, and chutney. Cubes of Rice Krispies treats, Oreo cookies, and cut pineapples were dipped into a fountain of decadent chocolate. Such were some of the flavors offered at the Santa Clara Sister Cities Association’s Tea Social, attended by over 140 community members at the Santa Clara Senior Center on the afternoon of January 26th.

“This is our third annual tea party,” says Debi Davis, event chair and city council member. “This event supports our youth commission for their exchange program.”

Davis also points out that the tea party has brought many of Santa Clara’s leaders and committee board members together. Some recognizable faces at the event included Vice Mayor Mahan, Triton Museum’s Chairman of the Board Rosalie Wilson, and City Council Member Teresa O’Neill.

“I’m impressed by the array of tasty morsels that the Sister Cities Association has provided for the guests,” says O’Neill, who shares that the chicken salad puffs were her favorite finger food. “I think it’s great for people to get together like this and support citizenship diplomacy. That’s the heart of what the Sister Cities Association is about.”

One of the event highlights was a raffle, where baskets of wine, beverages, Valentine’s Day-themed gift sets, chinaware for a tea party, spa items, and children’s gift sets were raffled off to attendees, many of whom eagerly sifted through their yellow tickets as the winning numbers were announced.

A big winner of the raffle festivities was Julianne Topliff, vice principal of Peterson Middle School. Topliff won prizes for three raffle drawings- an adorable green handbag shaped like a tea pot accompanied by a brooch and tea cup earrings, a basket of assorted gift items, and 25 miniature dessert dishes.

“I spent $15 on raffle tickets,” Topliff says. “It’s a cool thing to win. Whenever I attend community events, I buy raffle tickets because I want to help out a good cause.”

Another highlight of the event was the enchanting harp music played by professional harpist Karen Thielen. Seated in the middle of the event hall with her Italian harp, Thielen gave the tea party an extra note of grandeur as she played melodies such as “O Mio Babbino Caro” and “Chanson dans la Nuit.”

Attendees also commented on the eye-pleasing decorations and charming tea pots at each table.

“This event is very nice and elegant,” says Kathy Ball, one of the guests. “I like seeing all the interesting tea pots. There’s a different one on each table.”

The afternoon of the tea party was also very busy for Lynn Hoang, the new president of the Santa Clara Sister Cities Association, also currently employed in the interior design industry.

“This is my first year as president,” Hoang says. “I’ve always worked behind the scenes. Now, [as president], I hope to get to know everybody.”