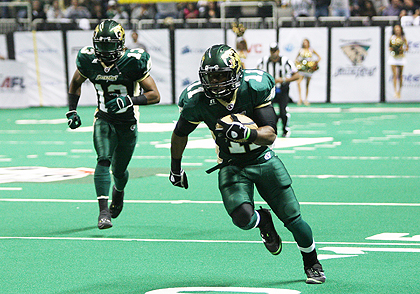 After a nearly two year hiatus, the San Jose SaberCats suited up and took the field at home against the 2010 Arena Football League champion Spokane Shock on March 11. In what could have been a disasterous return to the league, the Sabercats did not disappoint as the SaberCats crushed the Shock 76-48.

On the opening drive, it took quarterback Mark Grieb two plays to find veteran wide receiver Rodney Wright in the end zone for a 25-yard touchdown pass. The SaberCats backed up the touchdown play with another touchdown when defensive back Courtney Smith intercepted a pass and ran it for a 16-yeard touchdown. The SaberCats never looked back as they led by 21 points at halftime and in the second half the Shock never got within 14 points.

Offensively, Grieb had full control over the game. He threw for 222 yards, six touchdowns and went 21-25 (84%) on the night. Fullback/linebacker Chad Cook set a single-game career high with three rushing touchdowns and wider receiver Nichiren Flowers tied a single-game career high with four touchdown receptions. Defensively, the ‘Cats were taking care of business as they were able to pick off Shock quarterback Kyle Rowley three times. Two of the interceptions were returned for touchdowns.

The ‘Cats will next play the Kansas City Command at HP Pavilion, Friday, March 18, at 7:30 p.m. Tickets are still available.

Sports
Author Andrew BenschPosted on November 6, 2019
Playing host in the opening round of the CCS Division II playoff bracket as an 8 seed, the Wilcox Chargers did not want to...

Sports
Author Andrew BenschPosted on January 22, 2019
It’s been a little over a month since the Wilcox Chargers football team defeated the Kaiser Cats 42-27 to capture the school’s first ever...

Sports
Author Andrew BenschPosted on December 27, 2018
The Wilcox Chargers boys basketball team is built in similar fashion to their football team. While not the biggest squad in the world, they...
SPONSORED