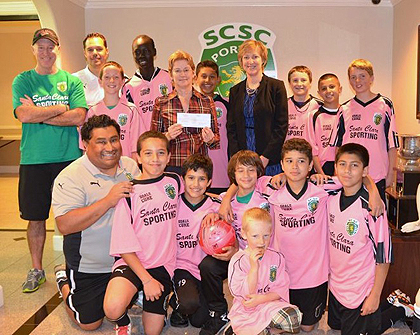 It was no April Fool’s Day joke. The Santa Clara Sporting Soccer Club presented a check for $18,000 on April 1 to El Camino Hospital for breast cancer screening for low-income women. The ’98 Black Team (pictured in the club bingo hall), all boys under 12 years of age, raised $2,054 of that amount during the club’s October 2010 Goals for a Cure month. It was one of the club’s 35 soccer teams—about 700 youth—wearing pink jerseys last October to promote breast cancer awareness and raise funds to fight it.

“It feels good that we’re doing it for a cause. It’s cool!” says one of the boys about playing soccer in pink.

Lea Morgan (pictured with check in hand), Development Director from the El Camino Hospital Foundation, and Michele van Zuiden (right), Executive Director of the El Camino Women’s Hospital, thanked the club for saving lives, pointing out that one in eight women is affected by breast cancer. The $20,000 the club donated in 2010 provided mammograms last year for 84 women. Ten of them were detected with breast cancer and received timely treatment.

The club has raised more than $55,000 since it began Goals for a Cure in 2008 in support of a soccer player whose mom passed away from breast cancer. For a video about Goals for a Cure and information about the Santa Clara Sporting Club, 282 Brokaw Road, visit http://santaclarasporting.com/home/514113.html.

Sports
Author Andrew BenschPosted on June 29, 2022
Tuesday’s opening game of the 11U championship between Campbell and Santa Clara Westside Little Leagues is one the latter will want to quickly forget....
SPONSORED