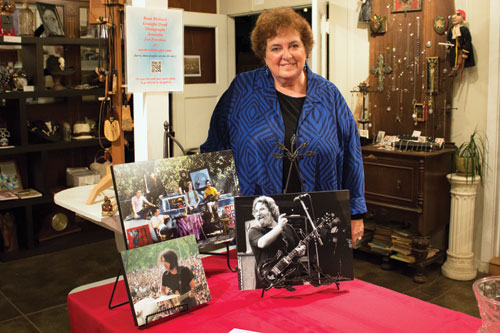 When people think back on the 1960s they are instantly transported to a time of free love, hippies, a changing political scene, and ground-breaking music. One of the most influential bands of that time was The Grateful Dead, and while much has been written on the psychedelic sixties scene, not much has been said from the viewpoint of the women who loved and lived with The Dead.

Author Rosie McGee has changed that with her book, “Dancing with the Dead,” a photograph memoir of her time with the band. McGee dated bassist Phil Lesh for a number of years during the band’s heyday and in an intimate book talk at Studio Bongiorno on Oct. 19, McGee shared some of the stories and photos from her book.

Although she refrained from telling many of the juicier details chronicled in her book, she recounted some of the tales, like the time when The Dead’s 710 Ashbury St. home in San Francisco was raided by police and she consumed a ball of hashish in vanilla ice cream.

McGee said she was initially afraid of telling her story because she didn’t think anyone would care, but admitted that she has received tremendous feedback from people, including retired music critic, Joel Selvin, who recently sent her an email saying that he devoured the book and it was one of the best books about The Grateful Dead that he had ever read.

In addition to divulging a few of the details she writes about, McGee took questions from the audience, who asked about Phil Spector, Pigpen’s drinking habits, and why she decided to write the book over 30 years after she and Lesh’s relationship ended.

“I had to wait for both of my parents to be gone,” quipped McGee. “I hadn’t even thought about writing a book, but once I started saying that I’m going to do this, I started compiling the stories one at a time. I thought that someday at least I would have them written down and I was just kind of casual about it. But then I really encountered: how the hell do I tell this story with my mother still alive, and I couldn’t figure it out. So, somewhere along the line, they did pass away and it freed me up to cut loose a little more…I also just wasn’t convinced that I could do it or that anybody would give a crap – that anybody would care. It turns out people do. People care a lot.”

McGee’s book is available in an e-edition and paperback through Amazon. Signed copies are available through her website, www.rosiemcgee.com. An audiobook version is in the works. Signed copies of the book are also available at Studio Bongiorno, 500 Lincoln St. in Santa Clara. Visit www.studiobongiorno.com for more information.

Arts & Entertainment
Author Melissa McKenziePosted on December 31, 2014
Playing music to the soundtrack of the listeners’ life, Santa Cruz-based Sage and The Chemists combines the unique paring of a violin and didgeridoo...