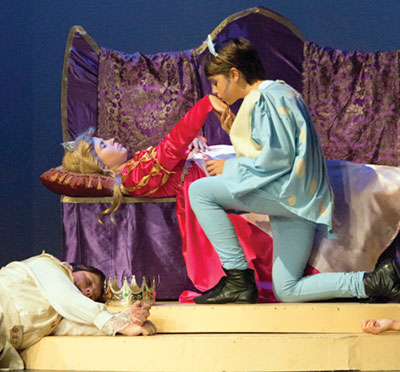 Two years ago the Roberta Jones Junior Theatre performed Disney’s Sleeping Beauty Kids – the tale of Princess Aurora who gets pricked by a spinning wheel, falls into a deep sleep, and can only be awakened by a prince’s kiss. While that story is one for the ages – and one that most people are familiar with – RJJT decided to perform, for its fall show, the other version of Sleeping Beauty, A Musical Fantasy, based on the fairytale by Charles Perrault.

The story is similar to the Disney narrative. Princess Melisande (Tamara Pantic) is put under a spell by the evil fairy Trollarina (Abby Wheaton). She gets pricked by a spinning wheel at 16, falls into a deep sleep for 100 years, and can only be awakened by a kiss from a prince. Her parents, the king and queen (Michael Kennedy and Joanna Fung) ask the fairy Phoebe (Carly La Placa) to put the entire kingdom in a deep sleep as well because the queen can’t bear to see her child in her lifeless state.

As time passes, no prince comes – only a little Blue Faun (Alex Cassidy). As the Blue Faun visits every day for the entire 100-year span, the fairies (La Placa, Stephanie Chee, and Samantha Girard) begin to wonder how it is possible for the animal to have never aged. Through a game of charades, it’s revealed that Trollarina has bewitched the little guy, although he has no recollection of his life before becoming a man-animal hybrid. All he knows is that he loves the sleeping princess.

It soon becomes clear that the last day of the 100-year spell will pass and the entire kingdom will sleep for eternity. But, during the waning seconds of the day, a little magic happens and the kingdom lives happily ever after. 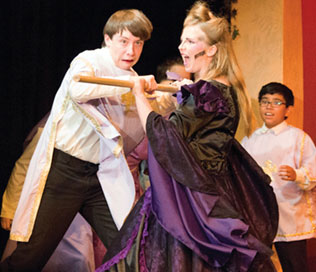 Vocally, this was one of the stronger performances by the theater group, particularly the singing by Chee and Fung. Additionally, the vocals of many of the other performers have improved over the years, as their voices have become stronger and more lyrical.

Likewise, the musical was well-cast, with Kennedy taking on one of the larger male roles (he played Prince Phillip when RJJT performed the Disney version in 2011, and was last Pooh in Disney’s Winnie the Pooh Kids) and Girard performing well in a slightly smaller role (she was last seen doing a wonderful job as Ariel in Disney’s The Little Mermaid).