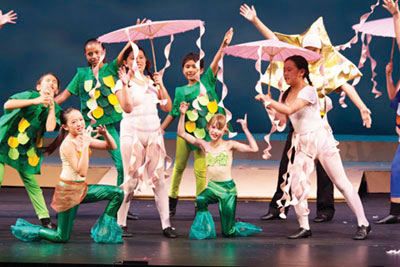 There were no “Poor Unfortunate Souls” when Roberta Jones Junior Theatre presented “Disney’s The Little Mermaid Jr.” at the Mission City Center for Performing Arts July 23-25. 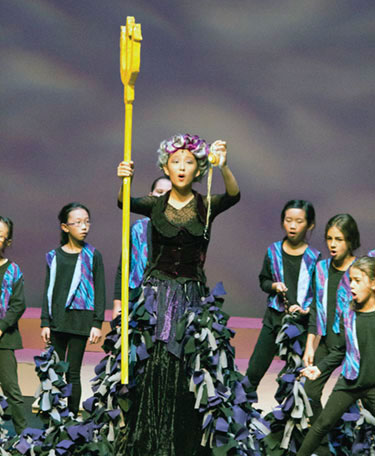 RJJT’s Mermaid, a Doug Wright penned book with lyrics by Howard Ashman and Glenn Slater and music by Alan Menken, was performed by students of the 2013 Creative Artistic Theatrical Showcase, a program ran through the City of Santa Clara. The show was also an abridged version of the 1989 Walt Disney film and focused more on selected scenes and songs that told the story opposed to a full reproduction of the movie.

What the theater did worked, and the musical was quite enjoyable, with Samantha Girard and Ryan McDaniel playing Ariel and Prince Eric. The show was Girard’s third role and McDaniel was making his debut performance on the RJJT stage. Nicholas Caldwell, Justin Wood, and Carley LaPlaca took on the parts Ariel’s friends Flounder, Sebastian and Scuttle, while Jin-Hee Lee was the conniving sea witch Ursula. Caldwell is an RJJT veteran, with Mermaid being his 10th play. Wood performed in his fourth role, and Lee tackled her “11th or 12th” performance. However, no actor in the play was as seasoned as LaPlaca. LaPlaca has now been on the RJJT stage 25 times, and, at only 11, is bound to see at least 25 more shows before graduating out of the program. 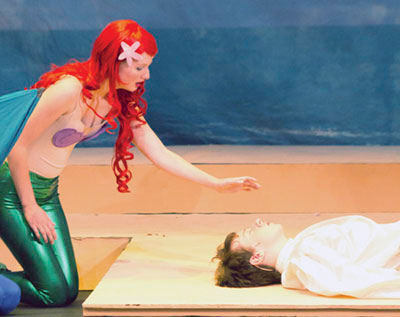 While the entire show was entertaining, the highlight was the performance of “Under the Sea.” Not only is the song the catchiest tune from the film, it gave all of the sea creatures a chance to shine.

RJJT will next perform “Sleeping Beauty.” Auditions take place at the Communitiy Recreation Center on September 3 and 4 at 3:30 p.m. Callbacks are scheduled for September 5 at 3:30 p.m. Tickets are also on sale for next year’s RJJT season. In addition to “Sleeping Beauty,” the theater group will perform “Peter Pan,” “Disney’s 101 Dalmatians Kids,” and “Rose Red.” Visit www.rjjt.org for information and to purchase ticket packages.

See RJJT This Weekend
On August 3 at 7 p.m. RJJT presents “A Night Off Broadway,” a talent show and fundraiser at the Community Recreation Center’s Mary Louise Mello Auditorium (969 Kiely Blvd.). Past and present participants in the program will perform and celebrate the 45th anniversary of the theater. Tickets are $5 and $8 dollars. Visit www.rjjt.org for more information.

Arts & Entertainment
Author Melissa McKenziePosted on April 9, 2014
There are plenty of interesting historical finds throughout the City of Santa Clara – from the houses featured on the annual home tour to...
SPONSORED

Business
Author Carolyn SchukPosted on March 22, 2021
No one is immune to racism, and the Bay Area’s multicultural population offers object lessons in multicultural racism, including anti-Asian racism among different ethnic...