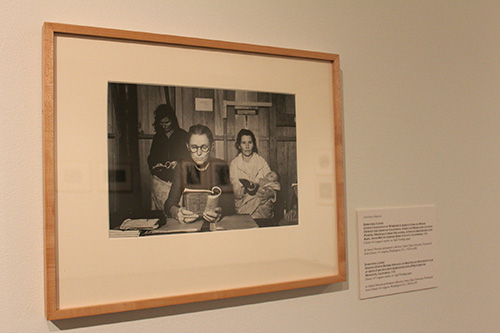 Currently on one wall of Santa Clara University’s de Saisset Museum is a rushing waterfall set against a backdrop of still rocks and trees in Ansel Adams’s “Yosemite Falls, Spring.” Beside this photograph is Judy Dater’s “Imogen and Twinka at Yosemite,” where photographer Imogen Cunningham and her camera comes across Twinka Thiebaud, in the nude. One photograph depicts nature and the other, women in nature. These two photographs and more can be viewed at the museum’s new exhibit “Virgin Landscape: Representations of Women and the American West,” running until March 19. Nudes and Landscapes, one of several exhibit themes, pairs photographs of nude figures with images of nature.

“Students in [a university Art History class] worked directly with Dr. Bridget Gilman, a former professor of Art History, to decide on the thematics for the show and select the artwork that would represent the intentions,” said Lauren Baines, assistant director of the de Saisset Museum. “Dr. Gilman and her students want people to think about the representation of the American West and in that conversation, think about our portrayal of women and how dynamics of power come into that conversation. We’re looking at one kind of rhetoric that [views] land and women as things to be potentially conquered or defined and we’re also looking at the power that women and female photographers have. We want to look at what women have in asserting other values, other definitions and other representations of the American West.”

The work of Dorothea Lange is shown in the wall depicting Migration and Agricultural Labor, another exhibit theme. According to Baines, a lot of Lange’s work is iconic and represents faces of the Great Depression. A 1938 image of Lange captures a family of migrating cotton pickers from Oklahoma occupying a deserted cow barn. A 1937 photograph gives a close up of a Japanese mother and daughter who are agricultural workers.

Edward S. Curtis’s “The Burden-Basket” features a Native American woman carrying a big basket on her back. She stares at the camera and doesn’t smile. This is one of the images shown to support the theme of Indigenous Women and Lands.

“With this section, we’re talking about the oppression of lands and people with westward expansion,” Baines said.

While Cunningham is one of the subjects in “Imogen and Twinka at Yosemite,” she photographed the subject in “Pregnant Woman,” depicting the heavy drooping breasts and the swollen belly of a pregnant woman. Part of the woman’s mouth curls into a small smile, as if she is keeping a secret. The rest of her face is cut off from the photograph.

“With the Gender Identity section [that ‘Pregnant Woman’ is a part of], the students really offer a spectrum of gender representation,” Baines said. “Some photographs play with if not push expectations of femininity while others portray women in more traditionally masculine dress and posture.”

A Triton Museum Lesson on Love