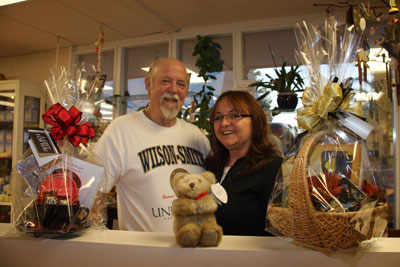 “We never intended to open a recovery store-it just happened,” says Angie Bottorff, a co-owner of All About Recovery, a San Jose-based store offering motivational and inspirational items for people recovering from an ailment, such as addiction.

Since 1991, Angie and her husband and fellow store co-owner, Rob, have been in recovery. They are grateful for the resources made available to them when they were struggling.

“We’re doing what we’re doing to help the community that saved our lives,” Rob says.

According to Angie, their recovery store functions as a bookstore and gift shop geared towards those who are recovering, whether they are alcoholics, drug addicts, or those with addictions to other things, such as eating, spending, or gambling.

“For example, we have books for those who have issues with spending,” Angie says. “Sometimes people come here looking for books on spirituality and meditation.”

The store also carries an array of medallions, mostly for people who participate in Alcoholics Anonymous, AL-ANON, Narcotics Anonymous, and other 12-step programs.

“These medallions are considered affirmation medallions, and they celebrate milestones in recovery from 10 minutes to 24 hours to 60 years,” Angie says.

“When a milestone is reached, most people get a medallion.”

“There is a need in the recovery community for a store of this nature and caliber,” Rob says. “I’m just a custodian- we’re just the trusted servants put at service to the community to help with recovery. Our milestone medallions and angel gifts offer hope and inspiration to not just the new people coming into our community, but to those who have been recovering from decades. Recovery is a spiritual journey.”

According to Angie and Rob, the original owners of the space their store now occupies were a couple named Mark and Judy- 22 years ago, they founded Anonymously Yours, also a recovery store. Since then, the store passed through a few other owners. In January 2009, Angie and Rob renovated the facility and opened a new store, now called All About Recovery.

“People told us the community needs something like this in the area,” says Rob, who adds that friends and family members convinced him and Angie to take on the store. “We’re offering a service to our community and offering a place for people in recovery to come to.”

Rob is a native of Colorado while Angie is originally from Michigan. Angie moved to California in 1960 and grew up in Milpitas, where she resides with Rob today. Sharing three children together, Angie and Rob had met 32 years ago.

“I worked at a hair salon three doors down from where he worked as a contract cleaner,” Angie recalls. “We had seen each other over a period of time. There was a deli at a corner where we used to frequent. I was in there one evening when he came in, and Rob asked me what I was doing, so I told him. And he talked me into letting him wash my car. We’ve been together ever since.”