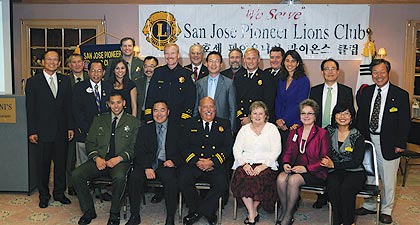 With the Police Department since 1994, Detective Shimada has worked in a variety of roles. In addition to working “…patrol on various shifts from 1994 to 2001,” Acting Police Chief Kevin Kyle stated, “Mark was a DARE officer from 2001 to 2005, teaching drug and violence prevention principles to thousands of fifth graders. He coordinated the department’s first Every 15 Minutes program at Santa Clara High School, a program aimed at preventing drunk driving by students and which continues to thrive today. Mark was the Cadet coordinator for our department from 1996 to 2000, again working with young people. He was Field Training Officer, working with new police officers from 2005 to 2007. Mark received the Departmental Lifesaving Award in 2005 for successfully performing CPR on a heart attack victim. He is currently a detective assigned to investigate crimes against juveniles, a position he has held since 2007. Just last week, Mark received the Unsung Hero Award from a victim’s support group for his investigation of an on-going child sexual abuse case. Also last week, Mark solved a vandalism case that victimized ten high schools and involved tens of thousands of dollars in damage. Mark will be rotating back to patrol duties later this summer.”

Showing just as much pride, Santa Clara Fire Department (SCFD) Deputy Fire Chief-Operations Augie Wiedemann. Wiedemann had the honor of introducing a husband and wife team, Volunteer Battalion Chief Kent Clerk and long-time SCFD volunteer (and Kent’s wife), Barbara. “Kent became a member of the SCFD in 1988 and was assigned to work in Mission Hose Company. In 1989, he was promoted to Lieutenant, in 1995 to Training Chief and in 2002, to his current position as BC, the highest rank available in the Volunteer Division. He not only manages the 60-member Volunteer Reserve Division, he has responded to many noteworthy incidents such as the Oakland Hills and the Rivermark fires. In the Oakland Hills fire, he fought for 48 hours. At the Rivermark fire, five days after shoulder surgery, Barbara drove Kent to the fire where he supported the Incident Commander (Augie) in the command and control of the large fire.” Kent also is a certified Wildland Fire Fighter, started the Home Emergency Assistance Team (HEAT) in Santa Clara and taught many of the initial classes. Although Barbara is not an official member of the Fire Department,she and Kent are working on building the SCFD Museum. She is in the process of inventorying and cataloging 157 years of volunteer and paid FD memorabilia.