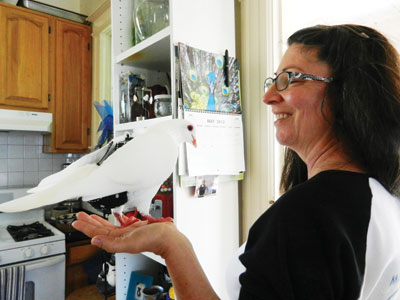 Elizabeth Young had no intention of working in animal rescue and she definitely never thought she’d specialize in pigeons and doves, but a change in a long-standing belief turned everything upside down and suddenly Young found herself immersed in animal rescue.

Having been an avid animal lover her entire life, Young avoided entering the rescue world because she didn’t want to open herself up to the suffering and heartbreak. But, five years ago she broke her long-held rule and started volunteering at the San Francisco Animal Shelter where she quickly noticed that each of the animals except King Pigeons had rescues.

“I felt like there was this humane, amazing web,” said Young. “Everybody was covered except for these King Pigeons.”

King Pigeons aren’t typically thought of as pets and were routinely euthanized at the shelter. The snow-white birds are most commonly sold as squab, a delicacy similar to veal served at many high-end restaurants.

Young’s decision to help these birds began when she met Gurumina, a pigeon who was surrendered to the shelter by her owner.

“Gurumina was so big and she was in her cage bouncing up and down and she sounded like a bowling ball in a dryer,” said Young. “At the end of my shift, I opened the door and she stepped out onto my hand and she was just so happy. I couldn’t allow her to be euthanized so I brought her home. The first thing I did was reach out to MickaBoo Companion Bird Rescue and asked if they could help me get the word out and they were very welcoming. Nancy Powell, at the time she was the chief operating officer, did whatever she could for me. And the adopter saw [Gurumina] on the website. I had her for only a month and found a great home for her where she still is.” Soon, the woman who avoided the role of an animal rescuer was thrust into a life of saving pigeons and doves. Young’s compassion took over and she started MickaCoo Pigeon and Dove Rescue.

Young and MickaCoo do not rescue King Pigeons from their deathly squab fate, but instead save birds who have been set free by others trying to do them a favor – only those who release them don’t realize that King Pigeons are domestic birds and rarely survive on their own.

While typically adopted in pairs, as pigeons and doves are social creatures and like to have a mate, occasionally Young comes across an unhitched bird and sends it to its new solo home.

“Pigeons are very social and when they connect with you, they really connect,” said Young. “They’re very much about having a partner.”

All MickaCoo adopters are given information on how to create a proper bird space. Pigeons and doves only need enough space to freely move around, sunlight, and food. They’re also trainable and function well in “pigeon pants” (a device, like a diaper, that collects droppings). However, pigeons are very particular about their feathers and tend to get a little fussy when they’ve been ruffled up so the pants shouldn’t be worn constantly.

Last year, MickaCoo saved 333 pigeons and doves from euthanization or the dinner table, but the rescue is currently at capacity and will soon have difficulty rescuing more of these sweet, gentle creatures unless they can find people willing to adopt or foster them.

“Pigeons are very smart, very loyal and very gentle creatures,” said Young. “This is a hidden problem and we need people to help.”

For additional information on how to volunteer, foster, adopt, or donate to the organization visit www.MickaCoo.org/mickacoo.html.

Community
Author Carolyn SchukPosted on April 16, 2014
In addition to sponsoring the annual Showtime show – an endeavor that takes a team of nearly 30 – the Santa Clara Women’s League...