Nationwide, communities produce excessive amounts of food waste on a daily basis. Project Preserve, Homestead FBLA’s Community Service Project, aimed to educate the 240,000 residents of Sunnyvale, Cupertino and Los Altos on this issue. Project Preserve was spearheaded by project chairs Sahiti Kadiyala and Erin Yoon, who organized the year into phases, each targeting a specific goal.

In the first phase “Empowering Education,” the project chairs conducted weekly meetings for approximately 40 members from October 2018 to March 2019. The first aspect of the year began with project members creating educational posters regarding the significance of food waste, which were hung up around Homestead High School’s campus, impacting over 2,200 students and staff. In addition, the project chairs invited Ms. Karen Gissibl of the Sunnyvale Environmental Services program to speak about the current FoodCycling program at residences in Sunnyvale,

“Community Cookbook” was the second phase of Project Preserve. Along with the guidance of project chairs, members created recipes which effectively repurposed food waste. Once the recipes were made, members designed them into Instagram posts which were posted on the “homestead.cs” Instagram account with over 150 followers. The project chairs also created a hard copy of the cookbook sponsored by Juniper Networks, which they distributed around Homestead High and local libraries. 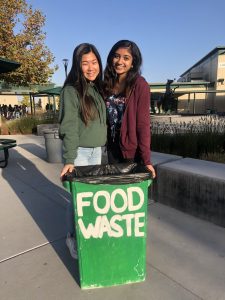 One of the most important phases of the year was “Impactful Implementation.” Since August 2018, the project chairs worked with school administration towards getting food waste bins implemented onto their campus. The project chairs consistently met with school administration and created an official proposal to implement food waste bins. Project members were in charge of designing the bins and painting them, while administration was in charge of regularly taking the wasted food to compost instead of landfill. Due to the new implementation, the food waste bins began receiving overwhelming positive attention from faculty and students. One student even decided to create a fan page on Instagram, which quickly received over 1,200 followers. Overall, the food waste bins were able to save over 140 pounds of wasted food per week and made a significant impact on the school.

The last phase of Project Preserve was “Food Festivals.” At Nimitz Elementary in Sunnyvale, project members hosted multiple interactive stations for the students to learn about food waste. For example, students had the opportunity to make pieces of art using old zucchini and broccoli dipped in paint. Additionally, the Project Preserve conducted a Food Waste Senior Citizens night, where project members hosted stations with simple activities about food waste, in order to better educate senior citizens at The Terraces Senior Center in Los Altos.

Schools
Author Melissa McKenziePosted on October 17, 2012
Fitness, food, and fun were encompassed in the third annual Health and Wellness Fair at Peterson Middle School on October 11. “Today we are...
Schools
Author AdminPosted on February 16, 2011
The trustees of Santa Clara Unified School District will select a new district superintendent during spring 2011. Community input about the desired characteristics to...
SPONSORED