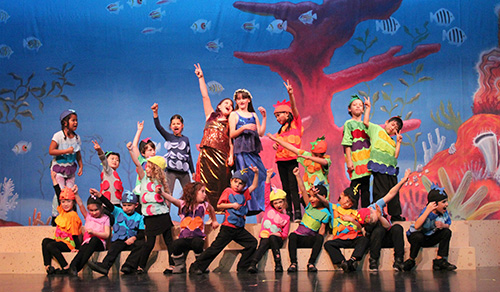 The fishes, comprised mostly of costumed kindergarteners and first graders, sang with spirit at the Feb. 1 rehearsal of the pre-show for the production of “The Little Mermaid,” held in the theater at Santa Clara High School where the show ran through Feb. 11. The stage was set to a convincing background of sea life as schools of fish moved past seaweed, coral and algae. After the younger students’ performance, the older students in the Sea Cast at Washington Open Elementary School’s Drama Program emerged. They performed a musical about a young mermaid named Ariel who fell in love with a human and made a deal with the manipulative sea witch Ursula to trade in her voice for a chance to become human herself.

“I’d say that the educational purpose of ‘The Little Mermaid’ is to know what your heart desires and to know that anything is possible if you put your mind to it,” said Wendy Guttman, a producer who worked in Washington Open’s Drama Program for 12 years. “We had some parents question whether it was okay for Ariel to give up her life for a boy and my response to that is that she had been admiring humans before she ever saw Prince Eric.”

Guttman co-produced “The Little Mermaid” with Carrie Scott and Stephanie Schulte. At Washington Open, parents whose children participate in the drama program must volunteer to support the production. Parent production teams include costumes, rehearsal supervision, backstage, set and scenery, props and photography.

Amelia Tai, 10, as Ariel, portrayed optimism and hope while singing “Part of Your World” in a grotto filled with items from the world of humans.

“How I’m similar to Ariel is that she likes to sing and she’s famous for her voice and I’m famous in my class for my singing and it’s cool that we have that in common,” Tai said. “How we’re different is that Ariel wants to be somewhere else in her life. She wants to be on land and doesn’t feel whole living underwater. But for me, I’m happy with where I am right here right now. I don’t want to change anything.”

“It’s fun to play a character who is evil because you get to not be you and you get to be someone else,” Fuller-Boardman said. “I think Ursula is evil because Triton (Ariel’s father) stole everything from her and she wants revenge and to be the queen of the sea.”

Kennedy Rose Stiver, 11, as Mersister Adrina, explained that her character wished she could perform the solo that was normally assigned to Ariel in King Triton’s Court. Participating in the production was a positive experience for Stiver.

Crossing Guards Risk All for Love

CLASS NOTES - HAIL TO THE CHIEFS