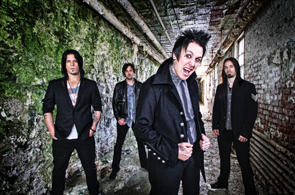 In the world of music all artists fall into one of four categories. The first two of which are probably the worst offenders in the music industry – those who put out catchy tunes but don’t sing a single note during their live performances (almost any pop group) and those whose albums are clean, but onstage they sound like cats in heat (think Blink 182). And then there are the final two categories – those who sound equally as good on an album as they do live and those whose live performances far exceed their recorded tracks.

Basically, some bands just put on a great show.

Papa Roach, who played at Avalon Nightclub April 27, falls into the last and probably best category. The band, whose first major-label release went triple-platinum, brought a non-stop, high-octane performance show to a sold out venue.

Jacoby Shaddix and company kicked off their energy infused set with Getting Away with Murder, the title track from the band’s 2004 release and followed it up with Burn, the second single from PR’s most recent Time for Annihilation album.

Among Papa Roach’s 15-song setlist, were songs from six of the band’s seven studio albums including some of their most recognized hits like Forever, …To Be Loved, and Scars. There wasn’t a moment of downtime with fans constantly singing along, chanting, screaming, jumping and per Shaddix’s request “get[ting] f***in’ rowdy” during the dynamic show. PR chose to end the show with their debut single and arguably most popular song, Last Resort, and hardcore fans of the Vacaville, Calif. rockers were left craving more.

This was the fourth show on Papa Roach’s “Raid the Nation” tour. Also on the bill are Finger Eleven and Pop Evil. “Raid the Nation” will return to Northern California May 5 when the trio plays at the Senator Theatre in Chico.

Pop Evil did a meet and greet between Finger Eleven and Papa Roach’s sets. A little girl was seen giving lead guitarist Tony Greve a box of Peeps. Band members were also seen playing the rock star role by signing some of their female fans’ breasts – one of which joked that her husband was going to kill her when she got home for letting the band sign them.

Finger Eleven frontman, Scott Anderson, flubbed up his address to the crowd, and laughed when he told the crowd that he wasn’t going to let a problem with the English language stop him from completing his sentence.

Five Santa Clara Police Department members, sent to make sure no problems occurred, bobbed their heads to the beat during Papa Roach’s set.

No encore. After Last Resort the band cleared the stage, the house lights came up and roadies started removing set components like the platform Shaddix performed on.

Arts & Entertainment
Author Carolyn SchukPosted on March 9, 2011
For almost 40 years the Santa Clara Ballet has been an integral part of the South Bay arts scene, thanks to the dedication and...