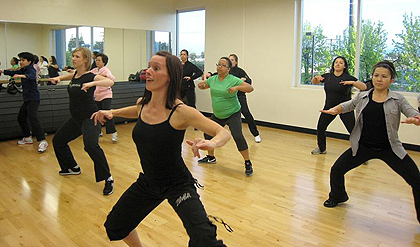 At The Rhythm Attic, each Zumba class is a party with vibrant music, energetic dancing, and lots of smiles to go around. Located on the second floor of the Airborne Gymnastics studio on 1515 Walsh Avenue, The Rhythm Attic offers its students a chance to dance, get some cardiovascular exercise, burn calories, and develop self-confidence in a supportive environment.

Though The Rhythm Attic has only been open for two years, the studio has already attracted a loyal following from both beginning and advanced students of Zumba.

“I’ve had people coming to our Zumba class who never wanted to exercise a day in their life. But once they found Zumba and found an emotional connection to the music, they won’t miss a class,” says Liz Crandall, head instructor and co-owner of The Rhythm Attic. “[The other co-owner] Justin Howell and I both believe music and rhythm is in everything we do.”

A typical one-hour class with Crandall begins with warm ups. Then Crandall brings students into a vigorous work-out with choreographed dance routines. Common dance steps performed in class include moves from salsa, merengue, cha-cha, samba, hip-hop and swing. In the final minutes of the class, Crandall leads students through post-workout stretches.

At The Rhythm Attic, the classes that run from Tuesday through Saturday are Zumba classes with choreography based on world rhythms and an emphasis in Latin dance. The Monday class is a U-Jam dance class, which is similar to Zumba in some ways, but the dance choreography is geared towards hip-hop music with some world rhythms mixed in.

“I want my class to be appealing to everybody,” says Crandall. “I pick a broad range of music, such as Latin music, world music, and belly dancing music, and we dance to them. I also want the class to appeal to people who don’t think they can dance but like the music they hear. Sometimes people learn a dance step or two because they like the music in the class.”

Crandall, also a gymnastics coach, moved from her native Sacramento to Arizona when she was 12 so she could train professionally in gymnastics.

“I was on the U.S. gymnastics team for seven years and attended the Olympics trials in 1992,” Crandall says. “I spent my whole life as an athlete. For about ten years, I worked on cardio machines two hours a day six days a week, and I hated it. I got exercise but didn’t get the spiritual release that happens through music. So I took a Zumba class in January 2009 and I loved it.”

“Liz makes the class interesting and challenging with all the different styles of dance she offers,” says Heidi Hirahara, who has been dancing at The Rhythm Attic for the last four months.

Born to Be Wild / Rated G for Orangutans in both diapers and totally naked. And Elephants rolling in dirt.