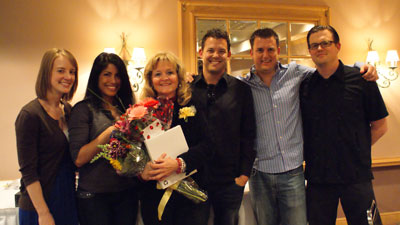 Pam Fox has some words of support for those who wish to pursue a career in education: “If you have the love and passion for working with children, you need to hang in there. If it’s your calling, you need to follow your dreams.”

Fox, the retiring principal of Haman Elementary School, has had a long history of supporting educators. Therefore, the teachers who received guidance from Fox during her 17 years with the Santa Clara Unified School District were not surprised that Fox won the district’s 2011 Administrator of the Year honor at a teacher and staff recognition event in May.

“I want to thank my fellow administrators who nominated me,” Fox says. “I’d also like to thank my staff because my staff went to the school board to have the school library named after me. It will be called the Pam Fox Library.”

Fox’s mother had been a teacher for 45 years. So Fox decided to follow in her mother’s footsteps by pursuing a career in education.

“I had been a mentor teacher and a consultant in training teachers to give instruction,” Fox says. “As a teacher, I get to reach a few kids a year, and as a principal, I can reach many more kids. My specialty is in curriculum and literacy instruction. I started out as a high school teacher where I taught P.E., and then I became an elementary school teacher. I’ve taught students in kindergarten, first, second, fifth, and sixth grade. I was the principal at Haman for 11 years and I have also been the principal at Pomeroy School and at Ponderosa School.”

Fox was born in Columbus, Ohio and currently lives in Saratoga. Having lived in California since she was a year old, Fox attended San Jose State University where she earned a Bachelor of Science in Physical Education, a minor in Psychology, and her teaching credential. She also received a Master of Arts in Education Administration at California State University at Northridge.

“I’ve also gone to Columbia University’s Teachers College in New York to become more knowledgeable in teaching a reading and writing workshop,” Fox says. “I’ve spent a lot of time and energy bringing that knowledge to the teachers. I’ve trained many teachers in the school district in workshops about teaching reading and writing. I’ve worked together with Barbara Friedenbach, a curriculum specialist, to put on these workshops.”

Fox is proud of her lengthy involvement with the school district.

“The Santa Clara Unified School District has a phenomenal reputation for offering powerful, differentiated instruction for children,” she says. “Over the past 17 years I’ve been here, the district has built in a lot of individualized performance-based instruction that informs teachers about student abilities and needs.”

As a retiree, Fox intends to continue providing professional development for teachers. She also plans to pursue her equestrian interests.

“I have a horse named Ali Baba,” she says. “The bulk of my time will now be devoted to my horse and being a better rider.”

From "Nowhere" to College-Bound