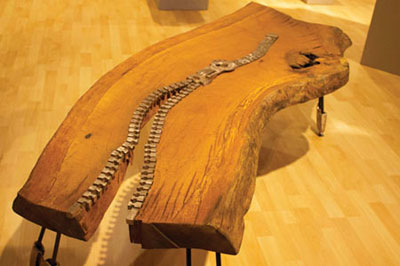 Sometimes it really does take two to make a thing go right.

Mission College’s Vargas Gallery opened its newest exhibit, “It Takes Two,” a show presenting artwork by three married couples who have studied together at the college, with a reception on March 2.

“There are three couples and we’ve all been taking classes here at Mission for several years and have all gotten to know the instructors,” said Eric Jacobson, one of the artists in the show. “Lynn [Todaro], who’s the director of the gallery, thought it would be a fun idea to do a show that featured couples who like to do art together.”

When the show was planned, each artist was asked to bring in two pieces they loved. But, as the show approached, the artists squeezed in additional favorites.

“I think we all had favorite pieces that we wanted to get into the show and then after that it was just sort of, ‘well, let’s see if we can get that in just to fill a blank,'” said Lyle Mosher, who is exhibiting alongside with his wife, Brenda.

And, while most of the art is individual works created by one half of each couple, there is one piece, done by Jacobson and his wife, Maia, that is truly a collaborative effort. 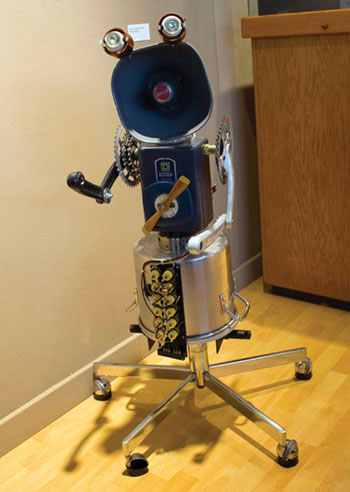 “The robot when you walk in – that’s a piece my wife and I did together,” said Jacobson. “So that’s truly embracing the couples idea. The joint piece is just a fun piece. We call him “Stanley, The Robot Who Does Absolutely Nothing” and that was really the inspiration behind it – we were going to create a robot who does nothing useful and who just sits there and looks cute. He’s a combination of interesting found objects – things we had been collecting for a long time, accumulating with the intent to someday make something with it. We made him for the show. We already knew the show was happening and we worked on him over Christmas. That piece came together incredibly quickly. Some pieces you just work on for months and the piece can fight you. This piece was just sort of meant to be. We started working on it and it really came together in a matter of days.”

“I felt like this show was really special to me,” she said. “It was the three married couples that keep taking the classes together over and over again. So, it was our show, not any show. I really wanted to have something new and special and not just use pieces that I had already shown. So, the moment we found out for sure this was happening, I got to work and I worked and worked and worked [on Theater for Birds] to the detriment of all else.”

“I didn’t see her for weeks,” added Eric Jacobson.

The show features the Jacobsons, Moshers, and Kuan Khor and Chai Ng. It runs through March 18. For more information visit http://www.missioncollege.org/depts/art/vargas/.

At the Edge of Art History: When Art Becomes Me: Tattooing and Body Art from Ancient Times to the Present

Irish Dancing Not Just for the Irish