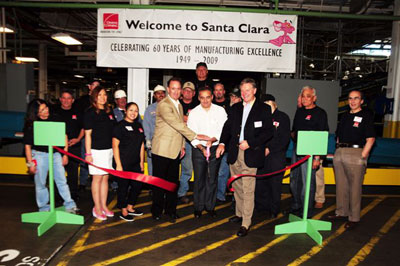 Sixty years later, the Darr Construction Company is long gone from Toledo, but Owens Corning (www.owenscorning.com) is still a household name and its trademarked pink insulation remains a familiar sight. And, as in 1950, that insulation is manufactured right here in Santa Clara – heartening evidence that American manufacturing is still alive and well, thank you very much.

In March, Owens Corning completed a $100 million overhaul of its manufacturing operations – $10 million invested in the Santa Clara plant alone – to produce its new EcoTouch, insulation that’s green from concept to installation.

Not only is it made from green materials – 50 percent is recycled content – and formaldehyde-free, the processes to make it are green, too – using less power and recycling all the water, paper and plastic.

The new generation insulation is friendlier to installers as well as the environment, installing more easily and with less dust say installers. Attesting to the company’s “green” profile, Owens Corning is the only U.S.-based construction and building materials company on the Dow Jones Sustainability World Index.

“Forty percent of U.S. energy is going to heat houses,” notes Santa Clara plant manager Jim Gerodimos. “That accounts for all of our imports of oil.” For every Btu consumed producing insulation, 12 Btus are saved every year by using that insulation, according to the North American Insulation Manufacturers Association (www.naima.org).

And Owens Corning extends that building green investment throughout the community.

The company is an ongoing supporter of Habitat for Humanity (www.habitat.org) – the non-profit known for its home-building sweat-equity partnerships. This month Owens Corning donated $5,000 to assist Habitat’s local low-income home-building program, and its employees have volunteered to assist in the actual construction.

Unsurprisingly, those Santa Clara employees played a key role in getting the new operation on line.

“In the course of the last six months, we completely changed materials, processes in a very short time,” says Owens Corning Building Materials Group President Chuck Dana. “Our employees were instrumental to converting the plant operation. EcoTouch has been more successful than I ever imagined. The quality of the product made here is one of the best in our network.”

Close community ties also helped. Owens Corning is Silicon Valley Power’s third largest customer and, as such, has played a role in the utility’s green power initiatives – for example, between 2003 and 2005 the company modified their production process to save more than 10.5 million kilowatt hours annually.

That investment appears to be paying off. The $5 billion company reported that sales were up 5 percent in the second quarter of this year.