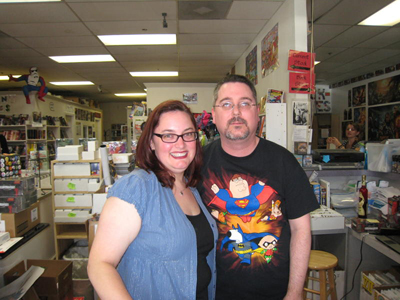 Anna Warren is a self-proclaimed geek. To show how passionate she is about promoting geekdom, Warren has the phrase “Geek Heaven” printed on the back of her card for her comic book and game store, Illusive Comics & Games. The store is located here in Santa Clara at 2725 El Camino Real, Suite 105.

“We have popular comics and ‘geek’ games here at my store,” Warren says. “I say ‘geek’ with love because I myself am a nerdy geek.”

According to Warren, the store was called Brian’s Books for 20 years as the original owner’s name was Brian Bouthillier. After the original owner sold the store, the next owner was Andy Mead. Four years ago, Warren purchased the stock from Mead and reopened a new store called Illusive Comics & Games. The endless shelves in Warren’s welcoming store are lined with a diverse array of comic books, graphic novels, and games.

“I meet people who say they came here when they were kids,” Warren says. “They remember when this place was Brian’s Books around the other side of the shopping center near Petco. The space we are in now is much larger than the previous space.”

“We are the largest comic book store in the South Bay and we offer an extremely warm environment here,” Warren continues. “The store is open, clean, and well-lit. Most comic book stores are dark, crowded, and like a boys’ club. Here we promote friendliness to everyone, including women, or our fan girls as we call them, and people of alternative lifestyles.”

“If you jump right into Superman, you might feel intimidated because there’s so much history and so many books out there about Superman, you wouldn’t know where to start,” she says. “If you’re a newbie, we might hand you one of our indie favorites, such as Knights of the Dinner Table if you’re a gamer, Fables if you like fairy tales, or The Walking Dead if you like the TV show.”

Challenging a general misconception that comics are just for children, Warren declares there are comics out there to serve audiences of all ages.

“Many of our customers here are actually grown-ups.” she says.

People who like “geek” games can participate in store events and gaming meetings. They can also browse through the store’s game selection, which include Catan, Dungeons and Dragons, and the whole Munchkin line.

Warren makes sure her store stays active in helping others.

“Each year, on the first Saturday in May, we and thousands of other stores around the world host Free Comic Book Day,” she says. “On that day, we give away thousands of comics and we also take donations for a cause. Last year, we donated to Make-a-Wish Foundation. We also raised money to have games and comics sent to our soldiers serving on the frontlines in Iraq. My nephew is serving [in the military] right now. This year, we raised money for Make-a-Wish Foundation again and for the Red Cross. We’ve also had canned food drives for Second Harvest Food Bank.”