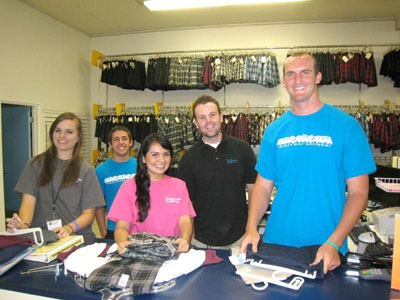 When Leon Poe opened Merry Mart in 1946, it was a children’s department store. The Valley Fair Shopping Mall wasn’t even around yet. Most people who grew up in the Valley would remember Merry Mart as the place where they got their first pair of Buster Brown shoes.

Poe sold the store to Hugh Campbell. After Campbell and his wife passed away, their daughter, Carolyn Graven took over as the owner. Today Merry Mart Uniforms offers custom school uniforms at its location on 33 Washington Street here in Santa Clara.

“[Taking on the family business] has been a really positive experience for me,” Graven says. “I’ve been the owner for 15 years, and I’ve been helping out here since I was 10.”

For Graven, overseeing a successful business that has been around for over half a century requires offering high-quality products and services, giving customers the personal touch, and reaching out to the community.

“We carry custom school uniforms,” Graven says. “We work with each individual school on their requirements and desires for their uniforms and we build it for them. Everything is specialized for individual schools. We’d put logos on certain items. Some schools want certain plaids. We work with vendors supplying higher quality uniforms because the clothing holds up longer and you don’t have to replace it as often. We also do embroidery so we could do logos for school shirts and companies.”

“We are truly a small family business and we have personal relationships with our customers and the schools that we serve,” Graven continues. “We don’t have a corporate office. So if a principal of a school calls me, they get me directly on the phone.”

“We just finished hosting a rookie week,” Graven adds. “During that week, we did activities and raffles and drawings for kids and parents who are new to uniforms. Throughout the year, we also make donations to the schools for their different fundraisers.”

Graven says her store is particularly busy during July, August, and September when many parents purchase new uniforms for their children for the upcoming school year. During the rest of the year, Graven and her staff stay busy meeting with the schools, reviewing uniform requirements, consulting with vendors, and placing orders.

“Being a small business in the Valley gets harder every single year,” Graven says of the effect the current economy has had on small businesses. “Anyone who has grown up here has seen less and less of the businesses you’ve grown up with.”

Still, Graven wouldn’t have it any other way. She loves running Merry Mart Uniforms and interacting with people in her job.

“[The rewarding parts of my work] are the relationships I’ve developed over the years,” Graven says. “They aren’t just relationships with my employees, but also with our account holders, our principals, the parents, and students. It’s nice to come to work and like the people you work with.”