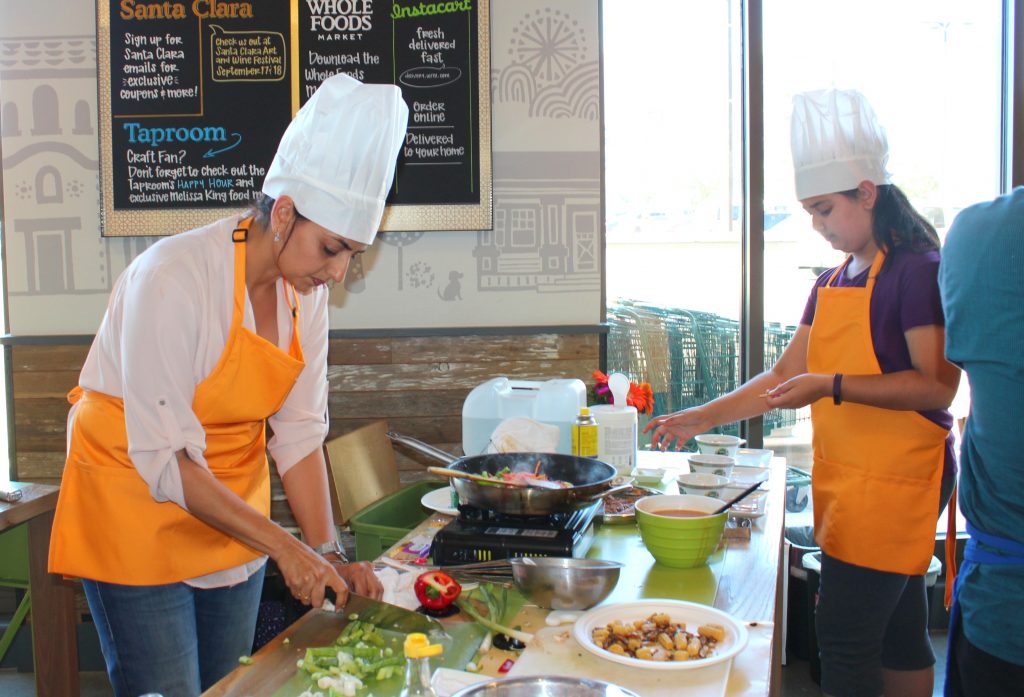 On May 20, the heavy beating of drums sounded in Santa Clara’s Whole Foods as lion dancers from Buu Kim Tu pranced through the Tap Room. Next, dancers from Expressions waved their arms and twirled around while performing Indian cultural dance. Celebrating Asian-Pacific American Heritage Month, the entertainment accompanied the afternoon’s Noodle Cook-Off where three teams competed to create the best vegetable noodles.

“For our Cultural Commission, it was part of our monthly performances and Commemorative Month Series,” said Santa Clara Cultural Commissioner Harbir Kaur Bhatia, who worked with Whole Foods staffers Tina Manickam and Jason Lieu to organize the event. “And for Whole Foods, it was a part of their ‘diversity is delicious’ programming. So it was perfectly aligned for both of our organizations.”

“The City Council has declared May to be Asian-Pacific American Heritage Month,” said Mayor Lisa Gillmor, presenting a Proclamation to the Cultural Commission. “We like to celebrate the diversity and different cultures in our community.”

Filling their bellies with dish after dish of noodles for the greater good of selecting the top dish were judges Gillmor; Wilf Seymour, Director of Food and Beverage at California’s Great America; and Dalbir Singh, Official Taste Tester of Sukhi Foods. Dishes were evaluated on taste, presentation and creativity. Store patrons also got to sample the finished product from each team.

Each team was comprised of the cook and their assistant. The workstations came with an electric burner, a skillet, a cutting board and a knife, bowls, plates, utensils and an assortment of ingredients, including Organic Planet’s Organic Traditional Whole Wheat Udon Noodles. Upon arriving at their stations, teams immediately got busy chopping, mixing and heating ingredients. (Contestants were informed of the task and its ingredients a few days beforehand.)

“I like to see how intense and passionate they are about their cooking and how they work well together and coordinate their efforts to create their dishes,” Gillmor said.

The grand prize winner was Cupertino resident Ankita Kaul, whose noodles with pineapple and marinated tofu offered balanced sweet and sour notes. The marinade was made with sesame oil, hot chili oil and soy sauce.

“The noodles were boiled first and then stir-fried in sesame oil and other seasonings,” said Kaul, whose 11-year-old daughter Aanshwi assisted her. “Then with salt and white pepper, I sautéed all the fresh seasonal vegetables–bell peppers, mushrooms, carrots and water chestnuts. After sautéing them, I added them to the noodles. I also had a little cup with vinegar and chili and I added that to the noodles and vegetables too.”

Though Kaul boiled most of her noodles, she also put aside a little bit of the noodles and fried them to design a crunchy texture for her dish. At the end, all the ingredients came together.

When asked what she would do with the $500 Whole Foods gift card she won, Kaul responded that she will try to make more recipes. Kaul, a home cook, runs a Facebook page @K2Fuzion where she shares her culinary creations.