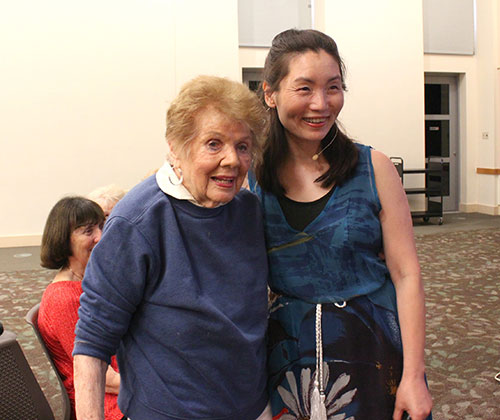 n May 1, Emma Kaliterna, 98, styled three heads of hair at her salon and trimmed a tree before heading over to Central Park Library to hear award-winning author Ying Chang Compestine speak. Compestine’s talk was held in honor of Kaliterna, a Santa Clara philanthropist who, over the years, has raised over $100,000 for many causes, including local schools, the Santa Clara City Library and the Santa Clara Vanguard.

“We’re having these [Emma Kaliterna] author talks once a year during Children’s Book Week to introduce children to the world and cultures and other exciting adventures that maybe they haven’t been exposed to before,” said Erin Ulrich, the library’s program coordinator of youth services. “We have the [Santa Clara City Library Foundation & Friends] who sponsors this program each year in Emma’s honor.”

The Santa Clara City Library Foundation & Friends also made it possible for the first 40 families attending the event to receive a free book written by Compestine. Sharing elements of Chinese culture in her work, Compestine has written 20 published books, many of which have won awards. She writes picture books, books for young adults and middle school grade readers and cookbooks for adults. Compestine also has given cruise lectures and conducted cooking demonstrations on television networks, such as the Food Network and the Discovery Channel.

“I want to share with you a bit about my journey as a writer and what I’m doing, what inspired me to write all these books,” said Compestine, showing a slide of a small child with a big smile. “That’s me. I was probably about five-years-old. That’s the last happy photo I remember. Because very soon after that, the Cultural Revolution started…You can read ‘Revolution Is Not a Dinner Party’–it’s about my life growing up in China. I describe about my life during that time. Food was rationed. Because of that, I’m very obsessed about food. I write about food. I love to cook and I love children. I feel like my childhood stopped when the Cultural Revolution started.”

Compestine referred to her young adult book, “A Banquet for Hungry Ghosts,” as a very scary book that should only be consumed by brave readers.

“It’s eight scary ghost stories; each of them leads to a recipe,” said Compestine, showing a slide of how she organized the book into a Chinese menu that included steamed dumplings and jasmine almond cookies. “I’ve had adults tell me that they read the story and they could not fall asleep. The first ghost story is about ghost hunting next to the Great Wall.”

Compestine also talked about “Boy Dumplings,” one of her picture books. Years ago, while making dumplings with her then three-year-old son, she expressed that if she was a ghost, she would crave dumplings with the filling of a chubby boy.

“That’s what inspired me to write this story: In China, there’s a ghost wandering around the street looking for something to eat,” Compestine said. “He spotted a chubby boy. ‘Wouldn’t he make a juicy delicious dumpling?’ And he captured the chubby boy.”

In the story, the boy offered the ghost a recipe for delicious boy dumplings. Was this a trick? Did the boy escape? Compestine told the audience they would have to read her book and find out.