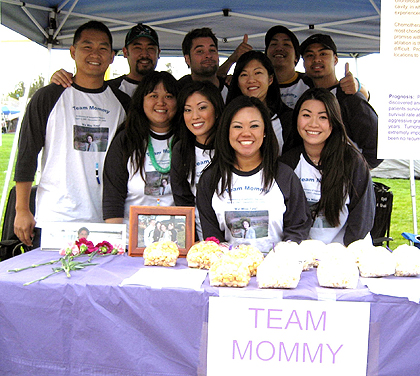 Everyone lost their “Mommy” when Samantha Nguyen died of cancer in 2009 at age 62.

“She had a big impact on each of our lives. Everyone calls her ‘Mommy,’ and she is the glue that still brings us together,” says family friend Llan Banting. Now Nguyen’s family and friends walk in her memory to raise funds to fight cancer, gathering for the second year since her passing for the American Cancer Society’s Relay for Life, a nation-wide fund-raising effort.

They dressed alike in black and white jerseys with “Team Mommy, We miss you” and Nguyen’s photo imprinted on them. They sometimes walked in solidarity ten abreast around the 400-meter Townsend Field track at Buchser Middle School.

Team Mommy, captained by Annie Ngo, Nguyen’s daughter, is one of 33 Santa Clara relay teams, comprised of 360 people who took turns walking the track from 10 a.m. May 14 to 10 a.m. May 15. For 24 hours, each team had at least one walker on the track.

“Celebrate, Remember, and Fight Back” was the mantra that kept them walking. The teams camped out in tents on the field and walked under the cover of clouds by day. They walked in the rain through the cold, dark night, lit by luminarias in honor of loved ones fighting back against cancer or in memory of those who lost the fight. And by the time the sun came out Sunday morning, the teams had raised over $72,000 for the prevention and cure of cancer.

“I love this spirit, seeing the whole community come out together and fundraising,” says cancer survivor Mike DeYoung, wearing a purple survivor’s T-shirt. DeYoung and his wife, Elise, were on Santa Clara Unified School District’s “Wild Walkers” team of 36, which raised about $12,000, the 2011 all-team high.

Luminarias honored Mike and their friend Yolanda Carr as well as the memory of Joan De Taeye, Mike’s mom, and Colleen Day, Elise’s sister. “I’m glad we’re raising funds for this thing we’re going to beat and to honor the people we loved and lost,” says Elise.

Team “Drumming Out Cancer” with 27 members, walked in support of cancer survivor Roddy Magallanes, whose passion has been drumming since he was 13. Magallanes entertained during the day, playing with the Jack Conway jazz trio and with a classic rock group.

“This is a great community event. It makes everyone feel supported—caregivers, survivors, and friends and family of people who have passed,” says Rowena Reyes, Magallanes’ wife and team co-captain with Kristi Wright. “It’s a place to kind of be up for a down thing. Some people can’t even say the word ‘cancer,’ but we all feel supported here.”

“It takes a lot of people to pull this off, and I want to thank them—the participants and many sponsors,” says Sahar Taghvaei, Santa Clara Relay for Life chair for the second year, especially thanking the Santa Clara sponsors who provided meals: China Stix Restaurant, the Lions Club, the Rotary Club, and University Electric Home Appliance Center.

It’s not too late to designate a contribution for one of the 2011 teams listed at www.RelayForLife.org/SantaClaraCa. The relay is over but the fight continues.