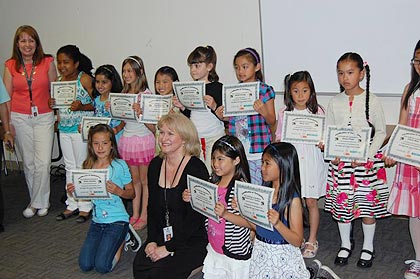 You hear it all the time- eat healthy, get your greens, cut down on sugars and fats. To help others actually see the messages that encourage healthy food consumption, the Santa Clara County Public Health Department teamed up with the San Jose Art Academy to host the National Nutrition Month Poster Contest. Open to students from grades two to five attending school in the Santa Clara County, this contest encouraged students to use art to convey a message about health.

“The theme of this year’s contest was Eat Right with Color,” says Linda Sweeney R.D., a nutritionist for the Santa Clara County Public Health Department, which is funded by a grant from the Network for a Healthy California. “We’re talking about the different fruits and vegetable colors out there.”

Earlier this year, Sweeney had notices sent out to schools to inform teachers about the contest, which requires that applicants create posters around National Nutrition Month set in March.

“When I judged a poster, I looked to see first how a student approached the theme, and second, how they exposed their ideas,” says Paul Chung, manager of the San Jose Art Academy and one of the several judges for the contest. “I looked at the use of color and how students mixed the mediums, like oil with water color.”

On Wednesday, May 4, about 80 people gathered at the Santa Clara County Public Health Department to recognize the students behind the winning posters in an awards reception.

“24 schools throughout the county participated in this poster contest and over 1,500 students submitted entries,” says Alejandro Villalobos, a public health nutrition associate with the Santa Clara County Public Health Department and an organizer of the awards reception. “I think it’s great we got so many entries. The students’ overall interpretations of the theme were impressive.”

Sohinee Saha, 10, a student at Challenger School at Strawberry Park in San Jose, was the first place winner from the fourth to fifth grade category.

“Some kids are getting obese and I don’t want them to suffer problems, so I made a poster about eating healthy foods to inspire others,” Saha says. “[In addition to winning entry to a San Francisco 49ers activity camp], I also won tickets to attend three 49ers games with my whole family. My dad is a big fan of the 49ers.”

Diana Pham, 8, a student at Cherrywood Elementary School in San Jose, was the first place winner from the second to third grade category.

“My poster is about eating right and [encourages others] to eat fruits and vegetables, and do healthy things,” Pham says. She looks forward to attending future San Jose Earthquakes games so she could wear her prize jersey, which was autographed by members of the team.

The recognition of the young artists who created the award-winning posters doesn’t end with the awards reception.