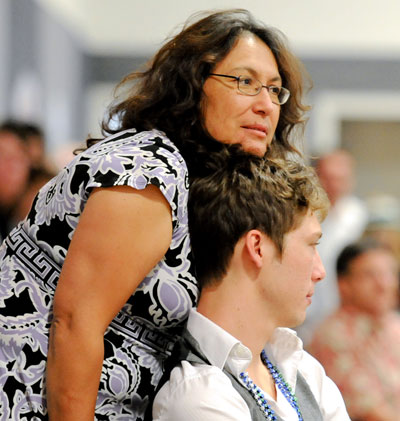 There’s an old expression, “You have to accept what comes your way in life.” While that might be quaint, many consider it defeatist – that life isn’t worth fighting for if things don’t go your way. On Saturday, October 8, at St. Justin’s in Santa Clara, in front of a room filled with people, Matt Rupel told of his life dealing with a horrible disease.

“The fact is, I’m not okay with [having Friedreich’s ataxia]. It’s not okay to know that Phillip [Bennett] died…I had faith the wheelchair would never come, or if it did, it would only be for short periods of time. I have faith that I will always keep fighting. But ,if I fight this alone, I will fail. But, if you will walk behind, I have faith that I’ll never surrender.”

Diagnosed with Friedreich’s ataxia (FA) at age 12, Rupel turns 21 this week. Now a student at Santa Clara University, Rupel saw his childhood dreams of what he would be when he grew up taken away from him by a disease that affects 1 in 50,000.

FA is a rare, life-threatening disease that causes progressive damage to the nerves and muscles. The disease causes them to slur their words, be unable to walk a straight line, causes severe curvature of the spine and severe heart problems that can kill them at a young age.

Now, confined to a wheelchair, Rupel has had to deal with the dramatic effects FA continues to have on his life. Bennett, who passed away in March, four months shy of his 28th birthday, was one of the first people with FA that Rupel and his parents met after Rupel’s initial diagnosis. Losing Bennett has had a profound affect on the Rupels as Phillip helped them understand and learn about the effects of FA.

Six years ago, Bart and Brenda Rupel held the first FA-ITH (Friedreich’s Ataxia In The Heart) Fundraiser. Over the years, the money they’ve raised has gone directly for FA research. Although exact numbers weren’t available at press time, it is estimated this year’s fundraiser brought in over $60,000. That number wouldn’t have been possible without the generous help of the community – from the dinner provided by Outback Steakhouse in Campbell, to the band, the Peelers, to the silent auction items that included an iFLY Adventure, to the live auction getaways ranging from Kauai to a weekend on Wall Street. And, as a testament to the type of person Rupel is, his friends continued their tradition of serving as the wait staff. “Twenty-seven kids from college – from Fresno State to Cal Poly to Mission College, to Santa Clara University – are here tonight. Kids that have known Matt since elementary school and all the way through high school – came to help because it’s all about Matt. We’d do anything for Matt,” explained Katie Kusa, a student at Fresno State and one of Rupel’s long-time friends.

For more information on the fundraiser, or to make a donation, visit www.FA-ITH.org, or send an email to: FAITH.Rupel@gmail.com, or call 707-795-3293 and ask for Paul Konanz.