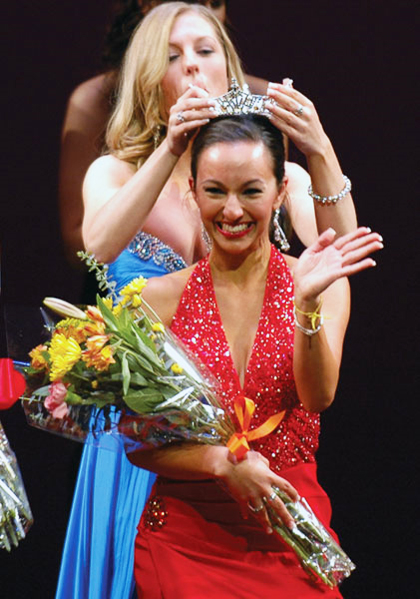 The Miss Santa Clara pageant on Jan. 8th at the Mission City Center for the Performing Arts kicked off with the eleven contestants performing an energetic dance routine. The energy remained with the young women through the remainder of the competition.

For her on-stage question, Felicia Alvarez, 23, was asked which current or former Miss California has been most influential in her life. Alvarez replied that she greatly admires many attributes of Jackie Geist, Miss California 2008. Geist, who happened to be a mistress of ceremonies at the pageant, beamed graciously at Alvarez’s response.

During the talent segment, Anna Vossler, 21, showed the world she can act and sing while performing a song from the musical Guys and Dolls. Jansie Tompkins, 22, sizzled up the stage with her flips and twirls in a jazz and acrobatic dance to “Proud Mary” by Tina Turner. Arienne Calingo, 18, displayed her graceful ballet moves to a song from the ballet Swan Lake.

In a ruby red halter dress bursting with sparkling gems, Tompkins was ecstatic about being the new Miss Santa Clara and winning the talent award. Having competed in four other Miss Santa Clara pageants, Tompkins found her fifth pageant to be a charm.

“From my experiences, I want to tell others to just keep going [when you have a goal.] Never say the word ‘can’t.’ Sometimes it’s okay not to win the first time because you gain experience each time you try for something,” Tompkins says.

Currently a student at San Jose State University, Tompkins looks forward to competing in Miss California and promoting her platform, which is pediatric cancer awareness.

“I plan to go to hospitals and schools. I plan to mentor kids to tell them about my platform and about the Miss America organization,” Tompkins says. She adds that she will celebrate her win by treating herself to chocolate.

In a strapless royal blue gown with a striking rhinestone belt, Alvarez was exuberant about being the new Miss Mission City and winning awards for her on-stage question and evening wear. She was also glad she was able to dance in spite of her previously injured heel bone.

“My heel bone is much better than before. My orthopedic doctor told me it wasn’t going to be 100%, but I wasn’t going to let that stop me from dancing and competing,” Alvarez says.

“My goal is to start five more programs with the Boys and Girls Clubs in Santa Clara County. In the meanwhile, I’m [continuing on with my studies] at San Jose State University,” Alvarez says.