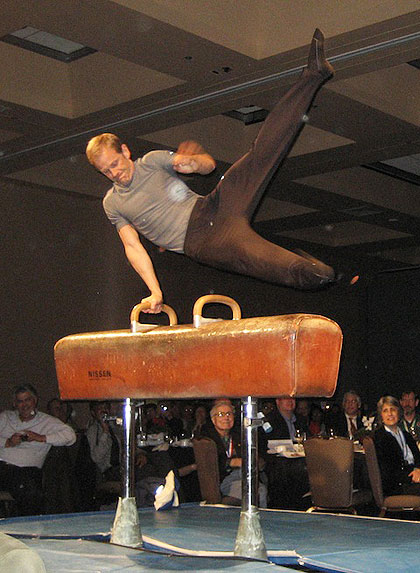 “Scouting is one of the finest organizations for overall development of a young person,” says keynote speaker Peter Widmar, who in 1984 was the highest-scoring American gymnast in Olympic history, winning two gold and one silver medal in the summer Olympics in Los Angeles.

“I gave up scouting for the Olympics, but my three sons are Eagle Scouts, and I enjoyed all that scouting encompasses as a father,” he says.

“Just as in scouting, Olympics preparation begins long before the moment of truth,” says Widmar before demonstrating his gymnastic skill on the pommel horse. “Practice makes permanent, so make sure you practice correctly.”

Eagle Scouts attain their rank by earning a minimum of 21 out of 120 possible patches. “Each patch represents something you learn,” says troop 394 Eagle Scout Andrew Ratermann—not to be confused with his dad, Andy, active in many community service organizations. Of the 30 patches Andrew had earned in eight years, music and law are his favorites.

“I had a great time in scouting,” says Ratermann, now a freshman at University of the Pacific. “It was one of the first places I got to take an active role as a leader.”

“Scouting leadership practices gave me an edge in being a leader in all parts of my life,” says class of 2010 Eagle Scout Daljeet Virdi—also from troop 394—who was president of his high school class and is now a Santa Clara University freshman.

“Scouting develops character and gives a code to live by that includes giving back to the community,” says Bruce Lee, scoutmaster of troop 394, one of five Santa Clara troops, including a troop for young men with special needs (www.scccbsa.org).

Of those who become scouts, only 4% attain Eagle rank. “Being an Eagle Scout is an advantage on college and work resumes,” Lee adds, recounting how when he was a job recruiter, the words “Eagle Scout” on a resume would always catch his eye.

Among other awards presented at the recognition dinner, attended by more than 400, was the Silver Beaver Award presented to adults for distinguished service to youth within a Boy Scout council. Andy Ratermann, Santa Clara Unified School District (SCUSD) Board of Trustees president, was one of eight adults in the Santa Clara County Council to receive this award.

The Boy Scouts of America celebrated its 100th birthday in 2010. Its stated mission is to instill values and help youth develop ethics, self confidence, and academic, leadership, and citizenship skills. BSA is a private organization that sets its own membership requirements, including upholding the current Scout Oath (www.scouting.org).