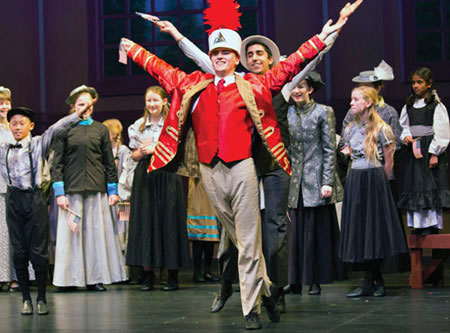 Since 1968, Roberta Jones Junior Theatre has been providing eight-to 18-year-olds with theatrical experience. On March 15, RJJT opened its latest performance at the Mission City Center for the Performing Arts – the Meredith Wilson penned play, The Music Man.

When con man Harold Hill (Chris LaPlaca) arrives in River City, Iowa, the town is initially in awe. The women are taken with the smooth-talking snake oil salesman. The boys are excited about the brand new band. Only one person seems to see right through him – the prim and proper piano teacher and town librarian, Marian Paroo (Deepa Sridhar).

Determined to take Hill down, Paroo searches history books to find a hole in his story, but when Hill gets through to Paroo’s shy, lisping brother, Winthrop (Andrew Melnick), and gets him to come out of his shell, it’s Paroo who seeks to save the scammer. She also begins to fall for the fraud.

When the town begins to realize that Hill isn’t going to show them his credentials, Hill becomes even more eager to hightail it out of River City. However, Paroo professes her passion for the hustler and he is unsure of what to do – does he leave like he’s always done, or risk getting caught just to be with her? Find out Hill’s fate by seeing The Music Man’s final three performances this weekend. 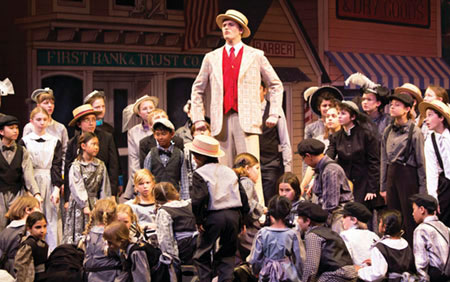 Often RJJT performers are praised for a particular vocal range or acting skill, but in this musical there is one star who stands head and shoulders above the rest – Sridhar as Paroo. Where has RJJT been hiding this fantastic girl? Outside of a few long notes that trailed off, Srihar sang beautifully. Her entire vocal range was melodious and magical and her acting abilities were pretty powerful as well. She alone is worth the price of admission. That’s not to say the other performances weren’t on par with RJJT standards, and each person did quite well. LaPlaca, and his sister, Carley, have become stage favorites. The Pick-a-Little Ladies (Samantha Girard, Tamara Pantic, Bethany Springs, Carley LaPlaca, Sarah Maciag, Maddy Reader, Kelli Vergano, and Abby Wheaton) sing the one song that’s sure to stick in the audience’s head, “Pick-a-Little, Talk-a-Little,” and The Quartet (Sophia McDaniel, Claire Stone, Sofia Jakovcevic, and Annabel Gong) have all had larger speaking or singing roles in previous productions – McDaniel was Baloo in The Jungle Book Kids, Stone was Charlotte in Charlotte’s Web, Jakovcevic was Fern Arable in Charlotte’s Web, and Gong was the Prosecutor in Gulliver’s Travels.

This could very well be one of the best RJJT performances yet. The last three shows are this weekend – March 22 and 23 at 7 p.m. and March 24 at 2 p.m. Adult admission is $8 and tickets for children are $5. Visit www.rjjt.org for additional information or to purchase tickets.