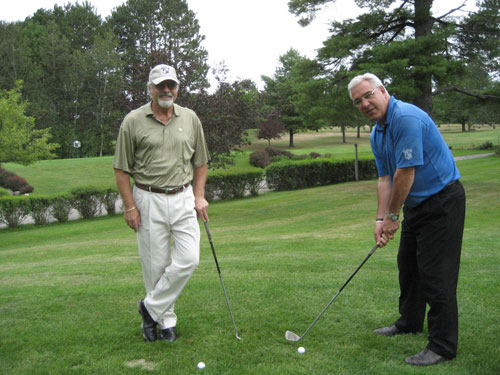 “Michigan is uniquely suitable to golf courses. It’s not barren like Florida or dry like California,” says Michigander Bob Brouwer, who has golfed in all three states. Michigan ranks third in the nation in number of golf courses, California second, and Florida first.

“Generally, we’ve got nice climate May to October. With rolling hills, forests, and lakes, the scenery is exceptional, and we’ve got a lot of space,” he says.

Retired club golf pro Ed Powers explains that the character of the land determines the design and nature of a golf course.

“Some areas Up North have the most dramatic character. Elk Ridge Golf Club in Atlanta is one of the most beautifully-designed courses in Michigan,” says Powers. “Some holes are breathtaking.”

Powers, who turned pro at 13 then at 18 became the youngest member of the National PGA, assisted his dad, Lou Powers, in designing Rattle Run Golf Club, north of Detroit in St. Clair. In 1988 “Golf Digest” listed Rattle Run, where Powers was club pro for 20 years, as one of the top 75 public courses.

“Golf is part of the Michigan culture. You see golf courses of all sizes and price ranges and difficulty, and they’re all so readily accessible,” says Brouwer. Michigan’s 1,000-plus golf courses are dispersed throughout the lower part of the state as well as Up North.

“I golf once a week at one of the top municipal courses in the country—Milham in Kalamazoo,” says Sharon Brouwer, Bob’s wife. “The senior rate is just $18 for nine holes and that includes a cart.”

“Golf is a big senior citizen sport, and Michigan has so many good courses to choose from that are reasonably priced,” says Bob, who retired in March and now has time to explore and enjoy diverse courses.

Sharon, however, likes golf for the sake of the game and is content to play the same course over and over to perfect her shots.

“One of the reasons that I have a really close relationship with two of my grandsons, is that I started taking them golfing when they were four. Now they’re 14 and 11, and we really enjoy a round of golf together,” says Sharon.

Near Detroit, Indianwood Golf and Country Club in Lake Orion hosted the US Senior Open July 9 – 15, won by Englishman Roger Chapman, who also won the 73rd Senior PGA Championship May 24 – 27 at Harbor Shores in Benton Harbor. (Now Chapman wants to buy a summer home in Michigan!)

In 2010, “Golf Magazine” ranked Harbor Shores, which overlooks Lake Michigan, number three of “The Best New Courses you Can Play.”

Oakland Hills Country Club, Bloomfield Hills, is, perhaps, Michigan’s most famous course because its challenging greens have attracted so many national tournaments since its founding in 1916. Oakland Hills, Crystal Downs, Arcadia Bluffs, and Forest Dunes are in the 2011 – 2012 “Golf Digest” listing of America’s 100 Greatest Courses.

“Golf is a wonderful way to socialize and still play a sport. It’s peaceful. You see so many wonderful creatures of nature on the course—even elks at Elk Ridge,” says Powers.

“Golf separates you from whatever problems you’re dealing with,” adds Powers. “You get so involved in the game—strategy, how to execute a shot, and what club to use—that you don’t think about anything else.”