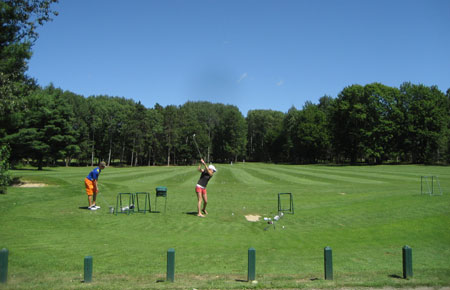 “Man, I love that game!” says Jim Gresham, who, like many other native Michiganders, has played golf off and on again through the seasons of his life, beginning when his parents first put a golf club in his hands when he was eight.

With 1,047 golf courses, Michigan ranks third in the nation, trailing second place California with 1,140, and first place Florida with 1,481, according to www.GolfLink.com.

“Florida has so many courses because everyone from Michigan and New York goes there in the winter or retires there,” says Gresham. Michigan’s golf season is April through October or November, when some courses are taken over by skiers.

Michigan, however, has more public golf courses—over 800—than any other state. Ten are included in the 2011 – 2012 “Golf Digest” listing of America’s 100 Greatest Public Courses.

“Michigan is full of wonderful golf courses, beautiful courses cut out of the woods,” says Gresham. Michigan borders four of the five Great Lakes (all but Lake Ontario) and has more than 11,000 inland lakes, so many courses have lake views.

“Some of the world’s best golf courses are in the northern part of lower Michigan—from Tawas across the state and up,” says Jim Dennis, club pro since 1996 at Lost Lake Woods, a private club at Lincoln, on the east coast near Lake Huron. “As well as great natural settings, there are reasonable rates and little traffic Up North.”

At Lost Lake Woods, the pro is proud of the junior golf program for six- to seventeen-year-olds that he began in 1997. It enrolled 166 junior golfers this summer.

“They’re the future of the game,” says Dennis, who first swung a club in his grandpa’s backyard in Okemos when he was three or four. He went on to graduate from Ferris State University’s PGA Golf Management School, the first such school sanctioned by the PGA of America.

Treetops Resort and Spa in Gaylord, with four courses and a nine-hole par 3, is one of Dennis’s northern Michigan favorites. He also likes Lakewood Shores Resort on Michigan’s east coast at Oscoda.

Well-known clubs string northward along the Lake Michigan side of the state. The Bear at the Grand Traverse Resort, Traverse City, designed by Jack Nicklaus, is one of the toughest in the Midwest. In 2010, “Golf Digest” listed it as one of the top five courses in North America. Crystal Mountain near Traverse City hosts the Michigan Women’s Open each summer.

“Golf is a hard sport; it takes lots of practice, but I love being outdoors in nature, the exercise, and the camaraderie,” says Gresham as he hits a bucket of balls with his daughter Joelle Gresham on the driving range at Lost Lake Woods.

“I learned by watching my dad and grandma play,” says Joelle, whose grandma, Arlene Gresham, began playing when she was 40 and hit her first hole in one when she was 80.