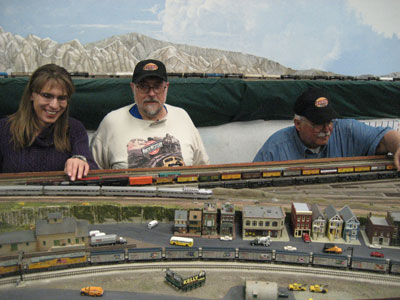 The romance and mystique of trains still stir the imagination, and kids—from three to senior discount age—got caught up in the lure and lore of the outward bound April 14 and 15 at the South Bay Historical Railroad Society (SBHRS) spring model train show and open house at the Santa Clara Caltrain Depot railroad museum at the end of Benton Street.

“Every kid likes a train. I started as one of the kids and just never grew out of it,” says Robert Marshall, president of the approximately 100-member SBHRS.

“I probably have way too many model trains,” confesses Marshall. “I have an extra room where they’re always on display.”

“I enjoy the history of railroads. They played a major role in the development of the country. California would not have developed if not for the railroad. Sometimes I think we’re losing the knowledge of that history,” says Michael Wagner, SBHRS museum librarian.

A list of the library’s more than 4,000 catalogued items can be accessed on the SBHRS website. Wagner has been told that the state railroad library in Sacramento is the only library in the state with more railroad items.

It’s easy to get caught up in the history when talking with enthusiasts like Marshall, Wagner, and SBHRS historian Doug Gross, whose uncle worked for Southern Pacific.

“This is the second oldest operating railroad station in the U.S. It has never stopped operating since 1864,” says Gross. During WWII the Army had an office at the depot to oversee war supplies passing through the station, which was built in three stages, beginning in 1863.

The restored Harriman style 1926 Southern Pacific Switch Tower is the only one of its style in the country still in its original location. Over the years, many abandoned railroad towers were taken over by homeless people and accidentally burned down.

“No layout is ever completely finished. It is constantly changing. Your skills get better and your taste changes,” says charter SBHRS member Robin Gilstrom.

Oregon-Washington Railroad & Navigation business car #184 was open for viewing. When fully restored, the 1912 Pullman railcar will be rented out for dinners to raise funds to support the volunteer-run museum. The depot has been leased from Caltrain since 1986 in return for the building’s restoration and upkeep.

Saturday, author Janet McGovern autographed her book “Caltrain and the Peninsula Commute Service,” which traces the history of Southern Pacific rail service between San Jose and San Francisco to the 1860s.

“This is a very important station. It’s the oldest one on the line,” says McGovern. &It’s important for people to come and see what has been done to restore the station and learn about the history of railroads.”

Admission is free to the railroad station museum, open Tuesdays, 6 p.m. to 9 p.m., and Saturdays, 10 a.m. to 3 p.m. The second Saturday of the month, noon to 3 p.m., you’ll be treated to bluegrass music played by members of the Northern California Bluegrass Society. Bring your string instrument and join in.

For information about the South Bay Historical Railroad Society and the Edward Peterman Museum of Railroad History, 1005 Railroad Avenue, check www.sbhrs.org or call (408) 243-3969.