Less than a year ago, U.S. Army veteran Justin Reynolds was homeless and ready to drop out of Mission College. He was living in a van and logging into the classroom only when he could find Wi-Fi.

“There was a couple of weeks of having to go to school while sitting in my van and just keep my camera off,” recalled Reynolds.

He was struggling and he didn’t know where to turn. Then, he contacted Mission College’s Valor Center.

It took Reynolds more than a decade to find his way to Mission College. He joined the U.S. Army out of high school and served in Afghanistan as an infantry combat medic. He was on the front lines when he injured his back.

“A lot of guys will say that wasn’t even the hardest part of going to war — getting injured. The hardest part is when you come home and everything becomes a reality all of a sudden,” said Reynolds. “Everything that you just witnessed and dealt with or didn’t deal with now all has to be dealt with. Especially when we leave the service.

“Now you’re thrown back into the real world at the same time having to deal with all these major, major traumas that don’t allow you to transition into the civilian sector quite as easily. You’re actually quite triggered all the time,” continued Reynolds. “So, it’s hard to interact with people or go out into public. That’s why I’m 30 years old going to community college…it just takes time for some of us to really get a handle on our mental health and physical health before we can mature enough to actually take on college.”

Debra Williams, the Program Director at the Valor Center and the Disability Support Program, says Reynolds’ experiences are common with many veterans.

“What we found is so many veterans coming to us directly from the field. They need a transition time. They need a period of time just to adjust back to civilian life,” said Williams. “They’ve been told what to do, where to do it and how to do it for so long that they have a very difficult time making their own schedule. [The Valor Center] really helps them make that connection.”

Williams says until nine years ago, the center was just a kiosk at Mission College. Now, it is thousands of square feet designed to offer as much help and comfort to veterans as possible.

“We try to bring all of these services together in one place, where they can actually come onto the campus. They can come in and be greeted by another veteran or the person at the counter. They can do their homework. They can get tutoring. They can see a counselor,” said Williams. “It actually gives the veteran a space to open up.”

Mission College strategically placed the Valor Center next door to the school’s disability support department. The proximity allows veterans to receive the educational support they need as well.

“A lot of our veterans [have] Post Traumatic Stress Disorder (PTSD), traumatic brain injury…and they do need extra time on assignments and extra time on tests. So, that’s where we’re able to work those things out with them,” said Williams. “Things trigger them. It might be some of the English readings or political science or history triggers events. So, we have a quiet room where a veteran could just go in there and be on their own and calm down.”

In addition to on-site services, the staff at the Valor Center works to make sure veterans get the help and services they need from the federal government. It was those services that helped turn things around for Reynolds.

“I messaged them, and I’m like, ‘I’m really struggling here. I’m about to drop out of college. I can’t do this right now.’ And they’re like, ‘No, no. Let’s figure this out,’” recalled Reynolds. “They checked on me every single day. They were so supportive and so sweet. They were just like angels during all of this. They did everything they possibly could to give me the help I needed. It’s like they went above and beyond, way above and beyond.”

Mission College expedited emergency funding so Reynolds could pay for a hotel. They mailed him a Wi-Fi hotspot so he could consistently connect to his classes. They even used Valor Center funds to help make sure his main focus was on school.

“It was enough to finish getting the rest of my supplies and being able to buy some new clothes and not look homeless anymore,” said Reynolds. “That was the biggest thing…that was the first time I’d been able to look nice in a while.” 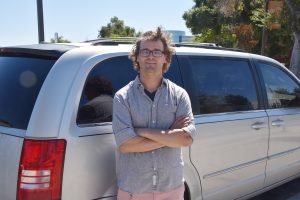 “It almost brought me to tears. It is so sad how people treat homeless people. Then there [are] the bright ones,” said Reynolds. “That’s what Mission College was. They helped me not drop out of college.”

Reynolds is still enrolled today. He is in the process of purchasing a piece of property in Arizona through a VA loan. Reynolds hopes to use the land and the business degree he’s currently studying for to start a sustainable farm. He knows none of this would have been possible without the team at Mission College.

“They care. They have a really good team there and you can tell they’re a family,” said Reynolds. “You walk [into the Valor Center], and the moment you walk in, you feel like you’re at home. That’s so important for us veterans. To have a place where we feel safe.

“They make you feel safe,” continued Reynolds. “There [are] no questions at all. If I walked in there and needed a shoulder to cry on or just needed a place where I could get away from the chaos of college, that’s a safe place right there. That’s so important for us to have.”

Williams says she was happy to help Reynolds and she hopes more veterans seek out the Valor Center in the future.

“He’s a great guy, and I’m just so glad we were able to help him. I really am,” said Williams. “It’s one of those things where you try every day to try to help somebody and when you really affect someone’s life like that. It’s just so good to hear that they’re doing better as a result of being in contact and getting the help they need.”

Yummy What? Yummi Chia! A Tasty Healthful Pudding Snack Made in Santa Clara