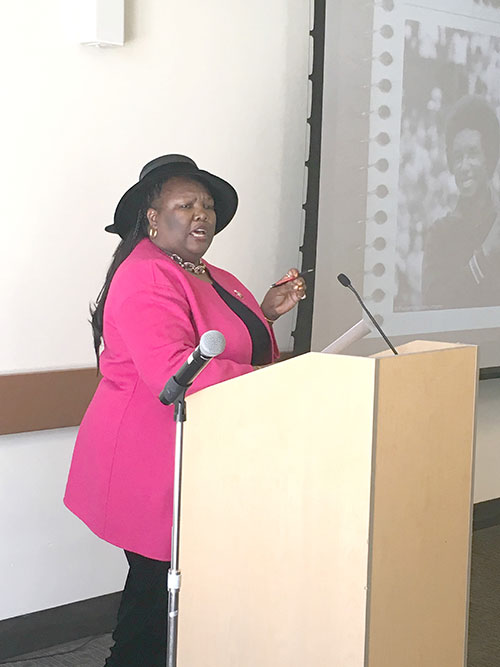 Mission College counselor and instructor Donnelle McGee read aloud his poem, “Love Turned Around”: It’s late/and there you are./ The buzz still jumping behind your cocoa butter flesh/blood speed through your weary body./ You telling me/ Donny…Donny baby, honey, Gram loves you./ I’m awkward facing this blunt of affection/but I believe you… The poem set the tone for recognizing valued members of the African American community, past and present, at the Feb. 27 African American Celebration Luncheon, held at Mission College’s Freeberg Hospitality Management Building.

“Each year, the institution wants to celebrate the achievements of African Americans and Black History Month,” said Dr. John Mosby, Vice President of Student Services at Mission College. “I think it’s important that our institution celebrates the lives of these individuals and their contributions not just to education but to our society as a whole.”

With humor and insight, Dixon led attendees through her thoughts on current events (“We’ve all heard the slogan “Make America Great Again.” America’s already great, we’re great and we’re not returning to the 1940s…”) and the motivation behind her goal to be a lawyer (“The only way you could be successful is to help others…I’m going to be a lawyer and I’m going to speak for those who cannot speak for themselves.”)

Dixon explained the reasoning behind her long-time campaign to start the domestic violence unit.

Dixon’s journey to becoming a lawyer sometimes came with challenges.

“I was accepted to a college prep high school–Lowell High in San Francisco,” Dixon said. “My counselor, she said, what is it you want to do with your career?…[I said]I want to be a lawyer. Everyone I had told before that time smiled and grinned and said ‘oh how wonderful.’ My counselor had a frown. ‘A lawyer? You can’t do that job. It’s too difficult.’ I told her where to go with her suggestion because I never was too quiet. My mother called the school and my mother explained ‘my child knows what she wants to do so put her on the right track for what she wants to do.’ I was lucky. Even though I only had a single parent and one woman in the house, Ms. Pierre was well-known and she made it clear ‘my girls are going to do what they need to do to be successful.’”

Dixon went on to San Jose State University where she studied Political Science. In 1980, she graduated from Santa Clara University’s law school. Positive self-talk and a ton of hard work paid off for Dixon, who was over the moon when she learned she passed the bar exam.

“I cried from the depth of my toes to the top of my head,” she said. “In that moment in that phone call, I had been told that my dreams had been fulfilled. I was an attorney and licensed to practice law in the State of California. I was 24-years-old.”

Every Student an Artist at Sutter Elementary School